Shaheed Aitzaz Hassan Bangash (Urdu: اعتزاز حسن‎) (born 1998[1]) embraced martyrdom on January 6, 2014 when he tackled a suicide bomber and stopped him to enter his Government High School Ibrahimzai in Hangu District, KPK, saving the lives of about 2,000 students.

"I salute the 14 years youngest hero of Pakistan Aitazaz Hassan Bangash‚ who gave his life to save the other fellows." [2]

Shaheed Aitzaz Hassan Bangash, 15, was with friends outside school when they spotted a man wearing a suicide vest.

Despite the pleas of his fellow students, he decided to confront and capture the bomber who then detonated his vest, his cousin told the BBC. Aitzaz is being hailed as a hero in an outpouring of praise on social media. There have even been calls for him to receive the army's highest honour awarded to those who have sacrificed their life for their country, though it is unclear if he would be qualified to receive it as a civilian. "We the citizens believe that State of Pk must award Nishan-i-Haider to Pk's brave son Shaheed Aitezaz", journalist Nasim Zehra tweeted on Thursday.

The incident took place on Monday in Ibrahimzai[wp], a Shia-dominated region of Hangu[wp], in north-western Pakistan. There were almost 2,000 students in attendance at the time of the attack, media reports say. "My cousin sacrificed his life saving his school and hundreds of students and school fellows", his cousin Mudassar Hassan Bangish told the BBC's Aleem Maqbool. "The suicide bomber wanted to destroy the school and school students. It was my cousin who stopped him from this...destruction."

He then described the sequence of events as related to him by witnesses at the school. Aitzaz's friends had urged him not to confront the suicide bomber but he ignored their pleas and decided to confront the man with the intention of halting him. "So he told them I'm going to stop him. He is going to school to kill my friends. He wanted to capture this suicide bomber. He wanted to stop [him]. Meanwhile the suicide bomber blasted himself which resulted in the death of my cousin", Mr Bangish said. He described Aitzaz as "brave" and a good student. "He always used to say 'I am always ready for my country'."

His family insist that rather than focus on the sorrow brought about by his death, they want to focus on their pride in his actions. "He is a shahid [martyr]. A shahid of his whole nation", he said. His family have also spoken of Aitzaz's actions in Pakistan's Express Tribune newspaper. "My son made his mother cry, but saved hundreds of mothers from crying for their children", Mujahid Ali, Aitzaz's father is quoted as saying.

According to Mr Bangish, people in the area would like to see the government give Aitzaz an award to recognise his bravery, and compared him with celebrated Pakistani education campaigner Malala Yousafzai - a comparison being echoed across social media.

On Twitter, users are paying tribute to Aitzaz using the hashtags #onemillionaitzaz and #AitzazBraveheart echoing the language used online around figures such as Malala and the Delhi rape victim, whose death galvanised Indian public opinion and prompted changes in rape laws there.

Former Pakistani ambassador to the US Sherry Rehman tweeted: "Hangu's shaheed Aitzaz Hasan is #Pakistan's pride. Give him a medal at least. Another young one with heartstopping courage #AitzazBraveheart." Hangu is close to Pakistan's semi-autonomous tribal regions, which have a strong Taliban and al-Qaeda presence and the area is also known for sectarian violence against Shia Muslims.

Mr Bangish said the region's residents are "patriotic people" but have to contend with difficult conditions. He he added that in order to cope with such conditions and tackle the "fights and blast ... needs courage like Aitzaz has. We salute his bravery."[4] 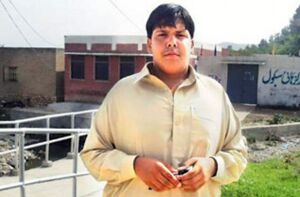 Aitizaz reached school late on Monday morning and was not allowed to attend the morning assembly as punishment. He was standing outside the gate with two other schoolmates when a man aged 20-25 years approached the Government High School Ibrahimzai in Hangu[wp] and said he was there to take admission, said Aitizaz's elder brother, Mujtaba.

It was during this conversation that one of the students spotted a detonator and Aitizaz's schoolmates ran inside. But Aitizaz stood his ground and got hold of the bomber who then detonated his vest. "I had never thought that my brother would die such a great death. He sacrificed his life to save humanity", Mujtaba said in an interview with The Express Tribune on Wednesday.

The school is the only one in Ibrahimzai, a Shia-dominated area in Hangu. There were nearly 2,000 students in the school at the time the attack occurred. Later in the day, the bombing, which was the first suicide attack at a school, was claimed by Lashkar-e-Jhangvi[wp].

Aitizaz was the second of his siblings and had two sisters. He was a friend to many, respected and loved in his village, where the news of his death spread rapidly. His father Mujahid Ali works in the UAE. He says he has not come back home to mourn his son's death, but to celebrate his life. "My son made his mother cry, but saved hundreds of mothers from crying for their children."

"I am ready to sacrifice my second son for Pakistan as well", Ali added. "There are a handful of people in the world who are martyrs; I am now one of those proud fathers whose son is amongst them."

The government should announce a civilian award, Tamgha-i-Shujaat or Nishan-e-Haider, for his bravery, Mujtaba added. Government officials had not visited the family until Wednesday night and neither had officials made their typical announcements of 'compensation'. Teachers and students say they are still in shock. The principal of the school, Lal Baz, said he is at a loss for words to express Aitizaz's bravery. "The attack targeted education and I am surprised neither the federal nor the provincial government functionary has visited the family. Their silence is condemnable." A student, Atif Hussain, said the vacuum left by his death may never be filled. "Aitizaz died for education and no one can snatch this right from us."[5] 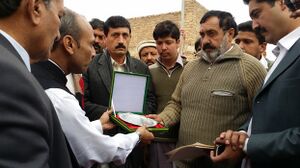 World Chairman of International Human Rights Commission[wp] Ambas­sador Dr. Muhammad Shahid Amin Khan presented the Highest IHRC Bravery Award to Mr. Mujahid Ali Bangash father of Shaheed Aitizaz Hassan, who foiled the suicide attack on a school in Hangu District. The International Human Rights Commission (IHRC) on January 12 had bestowed a global bravery award on Shaheed Atizaz Hassan. The award was presented to Aitzaz's father Mujahid Ali Bangash by the Ambassador Dr. Muhammad Shahid Amin Khan, Chief of the International Human Rights Commission, when he visited the home of martyred and condoled to his father.
"This young brave boy opened the eyes of whole Islamic Ummah and Pakistani Nation that they should not just look to their families; they should also protect and care the other families. He made ashamed by scarifying his life for hundreds of mothers by protecting their kids to all those people who are just sitting in air conditioned rooms and keeping themselves hide."[6]

Local resident Miqdar Khan said people in the district were hailing the teen as a hero, and hundreds of people attended his funeral to pay their respects. He said the teenager was known for openly criticizing armed groups.

"Aitzaz Hasan used to tell all that one day he would capture some suicide bomber, and his class fellows used to laugh," Khan said. "But this boy proved what he said, and I am sad that he left us too early."[7]