Angelica Hale (* 2007) is an American child singer from Atlanta, Georgia[wp]. She competed in the 12th season of America's Got Talent[wp], where she became the runner-up.[1] She is currently competing on the 1st season of America's Got Talent: The Champions[wp], and received the Golden Buzzer from Howie Mandel[wp] for her performance of Fight Song[wp] from Rachel Platten[wp].[2] In the finals she performed Impossible[wp] from Shontelle[wp]. 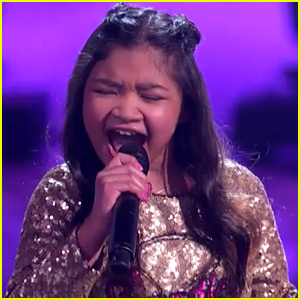 Angelica Hale was born to James Hale and Eva Bolando on July 31, 2007, in Atlanta, Georgia. James is reportedly half Filipino, half Caucasian, while Eva is from Iligan City[wp], Philippines.[4]

At the age of four, Hale contracted a severe bacterial pneumonia, causing septic shock[wp] and multiple organ failure, including her kidneys and permanent scarring in her right lung. In 2013, after spending 12 days on ECMO and 80 days in the Children's Healthcare of Atlanta[wp], Hale received a life-saving kidney transplant from her mother, Eva.[5]

Soon afterwards, Hale began taking singing lessons with vocal coach Tricia Grey in Alpharetta, Georgia[wp]. She then won a singing competition for five- to nine-year-olds, and has performed for many charitable functions, such as Children's Miracle Network Hospitals[wp] and Children's Healthcare of Atlanta[wp].[6]

In 2017, Hale competed on the twelfth season[wp] of America's Got Talent[wp], where she made it past the auditions round with her rendition of "Rise Up"[wp] by Andra Day[wp].[7] In the Judge Cuts round, Hale was given a golden buzzer by guest judge, Chris Hardwick[wp], after covering Alicia Keys'[wp] "Girl on Fire"[wp], and advanced immediately.[8] During the live shows, she sang "Clarity"[wp] by Zedd[wp] at the Quarterfinals and "Without You"[wp] by David Guetta[wp] for her Semifinals performance.[9] Hale advanced to the Top 10 finals where she performed "Symphony"[wp] by Clean Bandit[wp]. For the finale in episode 22, she performed "Stronger (What Doesn't Kill You)"[wp] by Kelly Clarkson[wp] with Clarkson and fellow contestant Kechi Okwuchi[wp]. She finished the competition in second place, becoming the youngest runner-up in the show's history.[10] 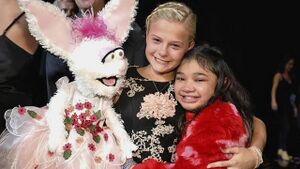 Hale currently lives in Atlanta, Georgia. She has a younger sister, Abigail, who was born while Hale was still competing on America's Got Talent.[12] Hale continues to have quarterly checkups with her doctors.