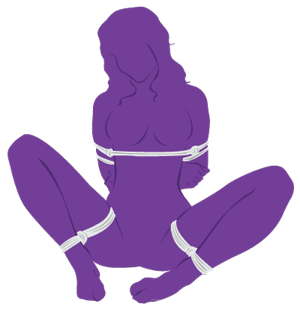 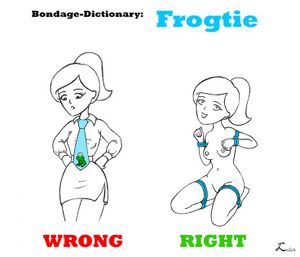 The frogtie is a bondage position in which a person's legs are bound ankle-to-thigh, in the likeness of a crouched frog.

The wrists[wp] on each side are often then tied to the ankle[wp]/thigh[wp] combination on their respective sides, although it is possible to tie each wrist to the opposite ankle and make the position noticeably more strict.

This tie places the person in a position where they are vulnerable but not completely immobilized and can still move about, albeit in an awkward crawling motion. The frogtie, with the person restrained so, can also be used as a restrictive sex position[wp] or as a basis for more restrictive bondage. The bound person's wrist tie can also be tethered to some sort of immovable ring by an arbitrary length of cord, allowing some limited freedom of movement while preventing escape.

In a similar position, the person's wrists are simply bound to their corresponding ankles. However, that position cannot be fully considered as a frogtie, because it does not match the "bound ankle-to-thigh" condition.