Hillary Diane Rodham Clinton (* 1947) is an American politician and a candidate for the Democratic presidential nomination in the 2016 election. She served as the 67th United States Secretary of State from 2009 to 2013, the junior United States Senator representing New York from 2001 to 2009, First Lady of the United States during the presidency of Bill Clinton from 1993 to 2001, and First Lady of Arkansas for twelve years. 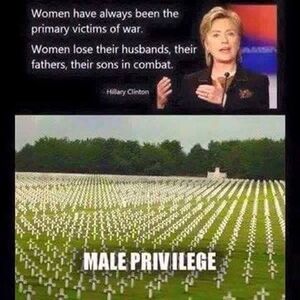 Women have always been the primary victims of war. Woman lose their husbands, their fathers, their sons in combat.

The US Secretary of State Hillary Clinton said at a conference on "Domestic Violence":