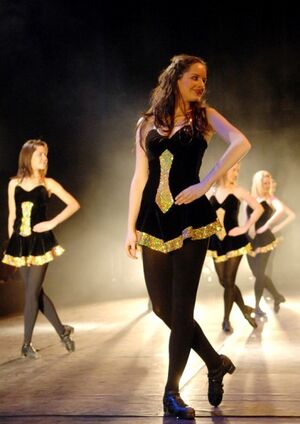 Jacintha Sharpe is the choreographer and primary female dancer for Celtic Legends[ext].

Originally from Kildare in the east of Ireland, Jacintha has performed throughout the world with some of the top shows in the world of Irish dancing. Having began to dance at the age of 4, by the age of 16 she had already taken part in the largest Riverdance performance ever held. As well as being a seasoned show dancer she is also in high demand as a soloist having performed with well-known groups such as the award winning band Gráda. Recognized as one of the most talented and enchanting dancers of her era, Jacintha's choreography accurately portrays her belief in the raw and energetic style of authentic Irish Dancing[wp].

As well as being a talented dancer and a regular highly placed dancer in the Irish Dancing World Championships[ext], Jacintha is also a qualified TCRG. This is an official title for a recognized Irish Dancing instructor. This places her among the dancing elite in the eyes of her peers. Now at the pinnacle of her career, Jacintha is delighted to Celtic Legends.