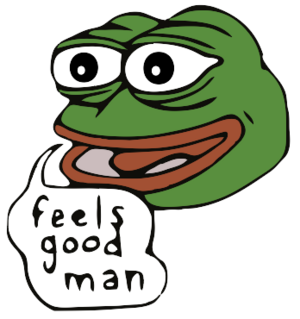 Pepe the Frog is a popular Internet meme. The green anthropomorphic[wp] frog with a frog-like face and a humanoid body is originally from a comic series by Matt Furie[1][2] called Boy's Club.[3] It became an Internet meme when its popularity steadily grew across Myspace, Gaia Online and 4chan in 2008. By 2015, it had become one of the most popular memes used on 4chan.

Beginning in 2015, the character's image has been appropriated as a symbol of the controversial alt-right movement. The Anti-Defamation League[wp] added Pepe the Frog to their database of hate symbols in 2016, adding that not all Pepe memes are racist.[4] Since then, Pepe's creator has publicly expressed his dismay at Pepe being used as a hate symbol.[5]

The meme's original use has evolved over time and has many variants, including Sad Frog, Smug Frog, Feels Frog, and "You will never..." Frog.[6] 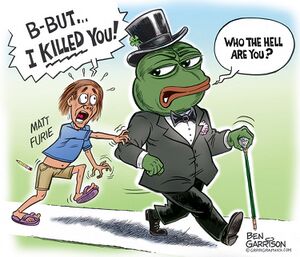 Pepe the Frog was created by American artist Matt Furie. Its usage as a meme came from his comic, Boy's Club #1. The progenitor of Boy's Club was a zine[wp] that Furie made on Microsoft Paint called Playtime, which included Pepe as a character.[7] He posted his comic in a series of blog posts on Myspace in 2005.[6][8]

In the comic, Pepe is seen urinating with his pants pulled down to his ankles and the catchphrase "feels good man" was his rationale.[9][10] Furie took those posts down when the printed edition was published in 2006.[6]

During the 2016 United States presidential election[wp], the meme was connected to Donald Trump's campaign[wp]. In October 2015, Donald Trump[wp] retweeted a Pepe representation of himself, associated with a video called "You Can't Stump the Trump (Volume 4)".[4][11] In May 2017 it was announced that Furie had killed Pepe off in response to the character's continued use as a hate figure.[12][13] 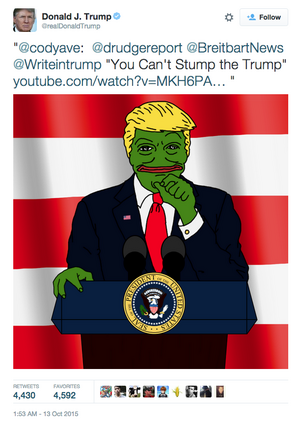 Pepe the frog as Donald Trump 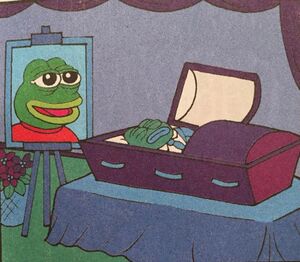