She was marriaged with Herman Greitzer, an attorney, who would later spend 22 years in the City Council.

Together with Bernard Nathanson, Lawrence Lader and Betty Friedan she was founding member of the National Association for the Repeal of Abortion Laws (later renamed the National Abortion Rights Action League and now known as NARAL) and becomes the first president of NARAL. 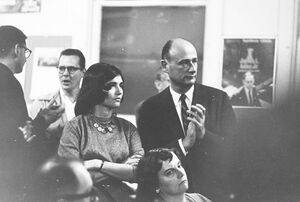 Co-district leaders Carol Greitzer and Ed Koch[wp] circa 1965, sharing a serious moment at a V.I.D. meeting as they looked toward the speaker’s podium.

She lives in Greenwich Village[wp], often referred to by locals as simply "the Village", is a largely residential neighborhood on the west side of Lower Manhattan in New York City[wp]. Greenwich Village, however, was known in the late 19th to mid 20th centuries as an artists' haven, the bohemian capital. The neighborhood is known for its colorful, artistic residents and the alternative culture they propagate. The Village again became important to the bohemian scene during the 1950s, when the Beat Generation focused their energies there. Fleeing from what they saw as oppressive social conformity, a loose collection of writers, poets, artists, and students (later known as the Beats) and the Beatniks, moved to Greenwich Village. In recent days, the Village has maintained its role as a center for movements that have challenged the wider American culture, for example, its role in the gay liberation movement. It contains Christopher Street[wp] and the Stonewall Inn[wp]. 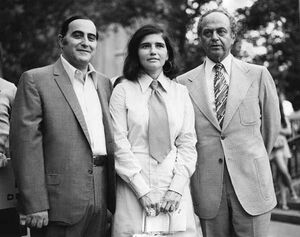 Carol Greitzer, a city council­member, in the 1970s, flanked by Tony Dapolito, Community Board 2 chairperson, left, and Edgar Tafel, the architect of the First Pres­by­ter­ian Church House.