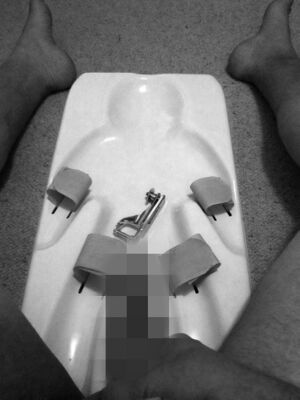 A circumfetishist is someone who has a sexual fixation for the circumcised penis, and/or derives sexual gratification from the act of circumcision itself.[2] Often their sexual fantasy involves infants.[1][3] Circumfetishism often involves fantasies of power and control, which may be ritualistically acted out. Circumfetishists have at least one website[4] and three clubs.[5] The Circlist[iw] website links to a discussion group.

The extent of circumfetishism among doctors and others who perform infant circumcisions is unknown.[6]

Is Circumfetishist an ad hominem attack?

In discussions, some people who can be classified as circumfetishists criticize that the term is an insult to their person as an ad hominem attack. Is the term circumfetishist in fact an insult?

Insult is the infringement of another human's honor by whatsoever means of expression, in particular an offensive statement or gesture communicated, and is a crime in some countries. The distinction between insult and defamation is that, from a focussing point of view, the former ascribes a value whereas the latter attributes or imputes a fact.[8]

Circumfetishist is a descriptive term for a person with an obvious fixation on circumcision as described above. So it cannot be an insult. Can it be a defamation then? This depends on what the person has done, said or written in this context. If a person has obviously and objectively understandable acted in a way which is consistent with the above fetish description, it is obvious that the attribute is a fact, not a defamation. If it can be shown that the person had never acted in such a way that the above description of circumcision fetish fits the actions, it would be defamation as a false assertion of fact to assign the term circumfetishist to that person.

Some of the persons attributed this way reply by trying to insult the discussion partner as foreskin fetishist. Is that a valid insult or defamation?

This conflict mostly occurs in circumcision debates where circumcision proponents and opponents of circumcision collide. So one can presume that the person attributed as a foreskin fetishist is in fact an intactivist. By definition, intactivists are human rights[wp] activists who stand up and speak up for the human rights of helpless children who cannot defend themselves against medically not indicated genital mutilation. This dilemma is primarily about the inalienable human rights of defenseless children. The body parts that are to be damaged or removed during genital mutilation are only of secondary importance. Since intactivists basically want to protect all children from genital mutilation, it is not only about the foreskin, but also about parts of the female genitalia or intersex[iw] genitals.

Since intactivists also want to prevent other medically not indicated physical injuries in children, such as tattoos or piercings, the third line is not about the male foreskin, but about other parts of the body.

For those who can stomach it, the comments and behaviours of proponents of circumcision would make a fruitful area of psychological study.[9] They fully bear out Woodmansey's comment that "Something must be done to help the parents who show such an irrational need...."[10] It would seem wholly plausible that inflicting circumcision on a boy provides some circumcisers and onlookers with a sexual thrill. Groups such as the Acorn Society[iw], the Gilgal Society[iw], and the Cutting Club[iw] openly admit to a morbid fascination with circumcision to the point of sado-masochistic fetish. These groups advertise that doctors are among their members. There are those on the Internet who discuss the erotic stimulation they experience by watching other males being circumcised, swap fiction about it, and trade in videotapes of actual circumcisions. Furthermore, there are anecdotal accounts of doctors becoming sexually aroused when circumcising boys.[11] Circumcision certainly provides an opportunity not only to handle boys' penises without the condemnation that a sexual assault (in the sense that phrase is normally used) would attract, but also the opportunity to exercise power over another human being, to alter the penis and to control it and the boy's future sexual life.[12]

Mutilating the genitals of others has a deep sexual motive. This motive combined with the urge to control people when, in the nineteenth century, doctors first introduced "medicalised" circumcision in the vain attempt to prevent masturbation[iw].[13][14]

Doctor Morris L. Sorrells, M.D.[wp], discusses the the sexual motives of those who circumcise, the perversion of circumfetish, doing harm to the genitals of others for a sexual thrill.