Especially the circumcision of the female genitalia attracted much attention due to the "industrial concern". What is new is the fact that the circumcision of the male genitalia world leads to many deaths or pulls lifelong suffering by itself for many. While male circumcision in the "third world" so-called primarily represents a ritual tradition, the routine circumcision has boys now developed immediately after birth in the North American states to a lucrative practice of directly and indirectly a number of jobs and careers depend. What connects the medicine man in the Solomon Islands with the hypermodern equipped doctor in the United States: both pass away without medical indication in children. There is a lack of medical necessity, which is the first place with impunity under German law a surgical procedure. 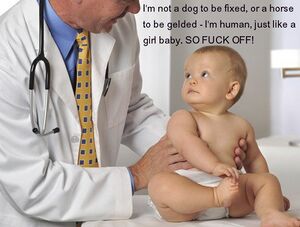 I am a human, not a dog to be fixed, or a horse to be gelded.

Short and on the point

Male genital mutilation (MGM) involves the removal or alternation of male genitals as part of a religious or social custom, on a man or boy that does not, or cannot consent to the procedure. When performed on an infant boy it is often called routine infant circumcision. MRAs object to all forms of genital mutilation. MGM remains legal in all nations today.

The rights of the individual must be paramount. Genital mutilation is a violation of a boy's rights over his own body.

There is strong evidence (elevated cortisol levels for an extended period, permanent changes in infant behaviour) that circumcision is traumatic for the infant.

Proponents of FGM[w4m] use the same arguments as proponents of MGM[w4m]. Contrary to what is often claimed the most common form of FGM is less severe than male circumcision. The argument that FGM is intrinsically worse than MGM run counter to the evidence.[1][2]

Male Genital Mutilation (MGM), commonly referred to by the euphemism of circumcision, refers to all procedures involving partial or total removal of the external male genitalia or other injury to the male genital organs whether for cultural, religious or other non-therapeutic reasons.[3][4]

Stedman's Medical Dictionary defines mutilation as, "Disfigurement or injury by removal or destruction of any conspicuous or essential part of the body."[4] Because male circumcision clearly entails the removal of a conspicuous part of the body and inflicts an irreparable injury and alters the appearance of the penis, the term mutilation is commonly employed.[4][5]

In some cases, a child's gender may be reassigned due to genital injury. There have been at least seven cases of healthy male infants being reassigned as female due to circumcision damaging their penises beyond repair[6][7][8][9], including the late David Reimer (born Bruce Reimer, later Brenda Reimer), who was the subject of John Money's John/Joan case, an unnamed American child, who was awarded $750,000 by Judge Walter McGovern of the Federal District Court after a military doctor was found guilty of medical malpractice in 1975, and an unnamed child who was circumcised at Northside Hospital, who received an undisclosed amount of money from the hospital.

Commercial harvesting of foreskins for the use in face creams

Alexithymia, a kind of emotional dissociation linked to neonatal and posttraumatic stress disorder, has been found to be associated with circumcision. One study observed early signs of circumcision-related alexithymia in four and five-year-old boys after their circumcision. It concluded that circumcision has detrimental effects on the child’s psychological functioning and adaptation, and that the child tends to seek safety in withdrawal and isolation. A clinical case report on circumcision noted that the only response available to the infant is shock, wherein the central nervous system is overwhelmed by pain, followed by numbing and paralysis. While some babies have been described as being "quiet" after circumcision, it has been surmised that the stillness most likely represents a state of dissociation.[11] The International Journal of Men’s Health published a study examining the link between the early trauma of circumcision and the personality trait disorder alexithymia. The study, by Dan Bollinger and Robert S. Van Howe, M.D., M.S., FAAP, found that circumcised adult men are 60% more likely to suffer from alexithymia, the inability to process emotions.[12]