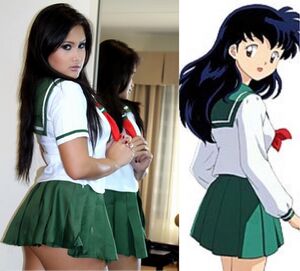 A cosplayer (left) and the anime character she's representing (right). 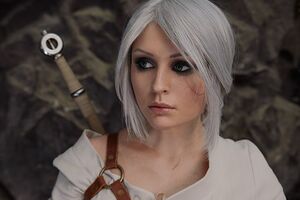 A model cosplaying Ciri, one of the main characters of The Witcher 3: Wild Hunt[wp]. 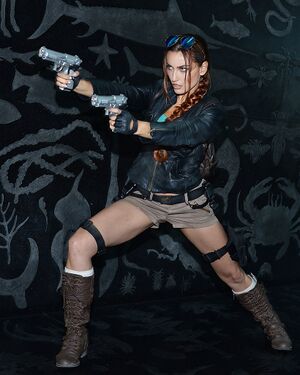 Cosplay (コスプレ kosupure), a contraction[wp] of the words costume play, is a performance art[wp] in which participants called cosplayers wear self-made costumes[wp] and fashion accessories[wp] to represent a specific character[wp].

The term cosplay was coined by Nobuyuki Takahashi[wp] of the Japanese studio Studio Hard in 1984. Cosplay is part of the popular culture in Japan and some other parts of Asia and in the Western world.

Favorite sources include manga[wp] and anime, comic books, video games and films. Cosplay is generally considered different from Halloween[wp] and Mardi Gras[wp] costume wear as the intention is to accurately replicate a specific character, rather than to reflect the culture and symbolism of a holiday event. As such, when in costume, cosplayers will often seek to adopt the affect, mannerisms and body language of the characters they portray. Almost all cosplayers wear wigs in conjunction with their outfit in order to further improve the resemblance to the character. This is especially necessary for anime and manga characters who often have unnaturally coloured and uniquely styled hair.[1]

This table contains a list of the most common cosplay competition judging criteria, as seen from World Cosplay Summit, Cyprus Comic Con, and ReplayFX.