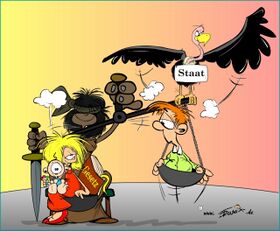 Fathers rights against maternal rights before the court - Children's rights are usually ignored and viewed as the rights of mothers. - © Cartoon Reinhard Trummer alias Trumix

No normal person would have the idea to take a tree half of its roots. - (German) family courts have no scruples to take half of their roots to a child. (Animated Gif)

A family court is a court convened to decide matters and make orders in relation to family law, such as custody of children.

The family courts were first established in the United States in 1910, when they were called domestic relations courts although the idea itself is much older.