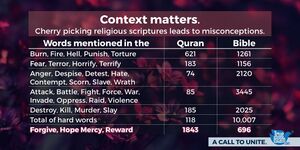 On the relationship between Islam and violence, there are both passionate confessions "Islam is peace" and angry responses on it, that was a lie.

Mirza Tahir Ahmad[wp] held on the occasion of the 100th anniversary of the Ahmadiyya Muslim Community[wp] in the Queen Elizabeth II Conference Centre in London on 24th February 1990 a lecture entitled Islam's Response To Contemporary Issues. This presentation has been greatly enhanced issued as a book.[1]

In regard of Islam's contribution to world peace, he says:

He claimed for Islam to have the mission and to own the ability to unite humanity under his leadership.

He then turns to the question of how it is possible that a religion with such a claim still excites no offense.