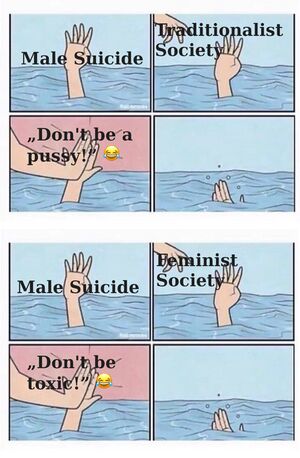 Male suicide refers to the gendered nature of suicide. In 2016, men committed suicide more than women in 175 out of 183 countries. In Europe, men kill themselves 3.7 times more than women, in North America they do so 3.3 times more. The region with the largest gender discrepancy is Eastern Europe where the gender suicide ratio is nearly 6 men to 1 woman.[1] Suicide is the leading cause of death for men under 50.[2]

In August 2016, the Washington Post published an article titled, "Men die by suicide at alarming rates. This hashtag tells men 'it's okay to talk' about their emotions", telling men to share their emotions and implying that men would rather commit suicide than open up about their feelings because of toxic masculinity.[3] This is a common feminist deflection that shows an alarmingly poor understanding of the issue of male suicide.

Men commit suicide primarily because of their fall or destitution within the male status system, the social system induced by male disposability that makes the attribution of human worth to a man conditional.

Despite the overwhelming amount of data that supports the fact that suicide is a gendered issue, misandrists often object that women commit more suicide attempts and that the only reason why men kill themselves more is because of their inherently violent nature that makes them pick more violent and therefore more efficient suicide methods. Both these statements are false and contribute to the silencing of male issues.