Male apathy is the passivity of men with the regards to fighting against misandry and the injustices they collectively face. Apathetic men are allergic to pro-male advocacy and activism. MGTOW, the red pill and parts of the men's rights movement are symptomatic of male apathy. This phenomenon is closely linked to strong man posturing attitudes and traditionalist-conservatism.

The nonsensical saying "Get Woke Go Broke" is an example of male apathy. The apathetic man will for instance rejoice over a feminist movie failing at the box office while ignoring that the spread of feminism in the entertainment industry remains unquestioned by these few isolated failures he desperately focuses on. 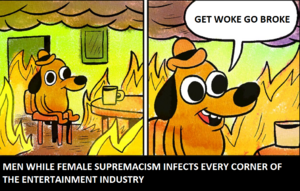