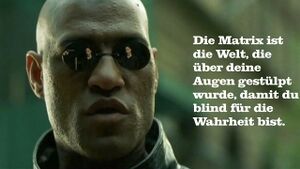 The Matrix is the world that has been slipped over your eyes so that you are blind to the truth. 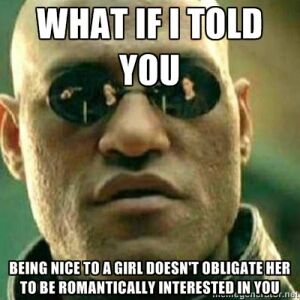 What if I told you being nice to a girl does not obligate her to be romantically interested in you.

The red pill is a term from the film matriz[wp] which, similar to the response of 42[wp][1] from the novel series The Hitchhiker's Guide to the Galaxy[wp], becomes very popular.

There are few people that the movie The Matrix[wp] have not seen or at least heard of. Of course, the special effects are great, but it is even more interesting when one considers that this scenario is not far-fetched. Many people live today as if they were caught in a computer program.

Matrix is a brilliant film and therefore there are the best Morpheus[wp] quotes:

Use outside of the film

Taking the red pill is a gradual process, and that the loss of illusions, like any other loss, initiates a grieving process.

But it's worth pointing out that psychology's general "five stages model of the grieving process"[wp] applies to TRP.

Red Pill, The Red Pill or TRP, means the truth from the MGTOW context. A person who understands the MGTOW beliefs and rejects the main stream beliefs is said to have "taken the red pill". Conversely, those who have taken the red pill are considered to be part of the MGTOW movement.

The name red pill came from the movie The Matrix (a film which was directed by two trans women) where Neo was told,

"This is your last chance. After this, there is no turning back. You take the blue pill - the story ends, you wake up in your bed and believe whatever you want to believe. You take the red pill - you stay in Wonderland[wp], and I show you how deep the rabbit hole[wp] goes. Remember, all I'm offering is the truth - nothing more."

Choosing the red pill therefore symbolizes accepting the truth and rejecting the propaganda sold by the main stream media.

Society has been living in denial and teaching lies to children, especially with regards to what men and women ought to be. TRP exposes those lies. The list below is not exhaustive but contain the most common ones.

Lie: Men and Women are Equal

First, there is no equality, as described above.

Second, equality is probably bad. Being equal requires the individuals to perform identical (or very similar) tasks in order to be comparable. However, as a family and as society, the lack of diversification of skills is bad for the same reason that putting all eggs in one basket is bad.

Women earn less money than men but majority of the healthcare, education and social spending goes to women. Women also do most of the shopping in a family. The argument can be flipped and say that men are oppressed.

Women can choose between abortion or childbirth, men can not.

Women can choose between staying home or work, men can not - especially if he has alimony to pay.

Lie: A Woman Who Lives Sexually Free Should Be Respected

Bulltshit. She didn't put a man on the moon. Shes a slut. The manosphere don't give a fuck. (Except with a condom)

Lie: A Woman Should Prioritize Her Career First Before Settling Down (AKA "Have it all")

A woman's career adds nothing to her MMV. And by the time shes "ready to settle down" both her SMV and MMV are rapidly declining. And she may be infertile. They are useless for purposes of having a family.

It is worthy to note that these women think that because their employer pays them 3x the salary of that 18 year old girl, her MMV must also be 3x of that girl. Alternatively speaking, the same price a man must pay to marry this infertile woman is 3x the price he would otherwise pay for the 18 yr old.

Lie: A Guy should Man Up and Marry (a Western Women)

This is the biggest bullshit that the manosphere loaths; and is discussed in greater detail, in marriage.

Lie: Men Have A Responsibility to Help/Protect (Western) Women

Fuck No! The manosphere doesn't take orders from sluts. And sluts lie.

Not all women are sluts but frankly many of those who bitch about men's responsibility, are sluts. They expect men to pay for everything (taxes, dates, etc) and behave like gentlemen, while sluts are free to ride the carousel and be treated like virgin Mary. And then they trash talk about oppression by men.

Furthermore, whenever these sluts run into trouble, they just play the victim card and often falsely accuse an innocent man who had previously treated her with generousity.

Lie: Men Should Be Taught Not to Rape / There's A Rape Culture on Campus

Sluts who lie about rape should be prosecuted, and there is a false rape accusation culture on campus.

Real rape is a criminal offense and should be reported to and investigated by police and decided by trial. More often, the sluts falsely report rape for other reasons. These sluts are usually more interested in the school's decisions on the case (i.e. expulsion of the male student) than the police investigation itself. And in many cases, sluts did not report the case to police, even as she insists the sex was not consensual.

On the other hand, false rape accusations are almost never prosecuted.

Some men abuse women. Some (or many) women also abuse men. Or in most cases, the couples are fighting each other, but women are far more likely to lose and report it as crime. Furthermore, if the "abuse" was inflicted by a women on a man or a man on another man, it would have been called "they had a fight over X".

Therefore, the primary cause for "abuse" is selection bias. Another cause of abuse is lying, for reasons similar to false rape accusations.

Red pillers generally consider the following to be true.

Truth: The Main Stream Media is Full of Shit

The MSM is full of shit because they only repeat what is politically correct and they viciously attack anyone who opposes the main stream views. In regards to family matters, the MSM is brainwashing the public into believing men are evil perpetrators and women are innocent angels. More importantly, anyone who tries to point out a woman's guilt is immediately labled as a bigot, or they accuse them of victim blaming. People who raise a different opinion often risk losing their job due to the MSM bandwagon. These so called supporters of free speech are actually one of the biggest enemies of it.

Truth: Government is the Problem

The goverment often tout themselves as saviors of the people and protectors of freedom when they are in fact the source of the people's misery.

Economically, the government praises themselves for how they are helping women and the poor by creating job opportunities and funding their education, health and childcare. But the so called job opportunities are mostly created in the public sector or other entities reliant on government funding. The resulting tax burden is destroying businesses and driving the lesser educated out of work - the very same people the government was trying to help.

In family matters, the government once again call themselves Gods. The adversarial family laws resulted in millions of broken marriages and homeless children. The biggest winners are the lawyers, and the biggest losers are the children. The government did this because... "its in the best interest of the child". Yet children from broken families have a much higher rate of growing up to be troubled adults. Many of them run afoul of the law and most will fail to build a stable family, creating a vicious cycle of more broken families.

Truth: Patriarchy is the Law

In a free society, a husband is superior to his wife, because if he wasn't she wouldn't have married him!

The manosphere don't buy the bullshit about gender equality because nice guys don't get laid. The (male) demand for sex always exceeds the (female) supply. As such, women hold the power of selection. (A.K.A. Briffault's Law). And consequently, men hold the power of wealth (Bateman's principle).

Consequently, the feminist prophecy is full of shit, and those manginas can talk all day about "feelings". Meanwhile, those who took the red pill will focus on making money, getting fit, banging hot babes and being "the Law" abiding citizens.

Thanks to Big Daddy G (A.K.A. government) and feminists, far too many women are now living their lives like a slut. Alpha Fux Beta Bux is now main stream. ~40% of U.S. and ~50% of U.K. children are born out of wedlock, and paternity fraud is everywhere.

The manosphere is here to game the system. Fuck the young sluts then leave them to the beta mangina's to pay the bills. Feminism is for fucking idiots and the brotherhood is gonna fucking prove it. (Like... literally)

It is possible to entice a woman to keep her promise, provided the result is always in her benefit. In otherwords, a free lunch.[7]

The Redpill is a collection of unpleasant truths about human nature or society that is not commonly known or is somewhat concealed by society.

The Redpill has two other definitions; the the manosphere sense and the incelosphere sense:

The antonym or opposite of the red pill is the blue pill. The way the term black pill is used on incel forums is basically the redpill + fatalism.