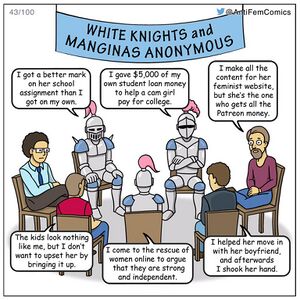 A mangina (a portmanteau[wp] of man + vagina) is a man supporting the ideology of feminism. In Germany, the most common term is Lila Pudel (Purple Poodle). Other terms are White Knight und Feminist toady.

Sometimes referred to as pro-feminist, sell-out or traitor, this pathetic excuse would rather ruin his fellow man's lives with falsehoods and misinformation.
Often spawned from feminist mothers and raised alongside "empowered" females, the mangina will often sell his soul in order to attain one-night stands.
In other cases, the mangina will suffer from a deep self-loathing, which manifests itself into campaigning for all things that will hinder his "oppressive" gender.
The Mangina is not a friend of the men's movement and must be treated with contempt at all times.[1]

According to Cinnamon Stillwell:

"There are some it seems who would like to do away with the notion of masculinity altogether. Robert Jensen, a journalism professor at the University of Texas, wrote as much in an October 2006 column, 'Men Being Men Is a Bad Deal: Guys Should Evolve Beyond Masculinity.' Jensen's column provoked an avalanche of laughter and scorn on talk radio and the blogosphere. Not only did Jensen come across as, well, a wimp, but his demonizing of manhood missed the mark. In equating masculinity with all things violent, Jensen underestimates his own s*x. For masculinity is not only about being a warrior. The manly virtues include character, confidence, honor, inner strength, pride, responsibility, loyalty, generosity, industry and dignity. To eliminate masculinity would be to eliminate the positive along with the negative.
Similarly, the natural and instinctive traits that constitute womanhood need not be exclusive of adaptations to modern life. Women should not have to apologize for their femininity, just as men should not have to apologize for their masculinity."[2]

According to David Martin:

Why would a man choose to be "Feminist"?

Whether such men are religious and called "social conservatives", or effete leftists and called "girlie men", they are effectively the same, and the term "White Knights" can apply to the entire group.[3][4]

Definition (expr.)
The term girlie men was first used in the eighties by Arnold Schwarzenegger[wp], when he was an actor. He wasn't a politician yet. It was used to identify weak men, men who act like little girls.
Example
After the basketball coach told his team that they were a bunch of girlie men, the team tried much harder. They actually made it to the finals![5]