From WikiMANNia
Jump to navigationJump to search
Warning, this article could have satirical elements!
Main Page → Ideology → Feminism → Purple poodle

Purple poodles (German: Lila Pudel) are men devoted to feminism and who actively spread this ideology. The closest English equivalent is "mangina." A purple poodle is not merely an opportunist who wants to ingratiate himself with women, but a true believer. 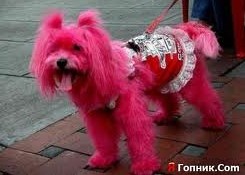 A purple poodle is a male being who serves feminism without ever questioning its validity. The purple poodle loves putting women above himself. Fear of a lack of intimacy, a craving for recognition, coupled with maniacal career ambitions drives him into hopeless opportunism[wp]. Thus, he kowtows to the very women who humiliate and domesticate him. He bows to women whenever he believes this to be advantageous and yields all normative power to them. Purple poodles even applaud when a feminist tries to illustrate the inferiority of men through absurd theories about Y-chromosomes. The poodle never questions female demands and he practices missionary zeal: "Behold, men! Become as I am!" [1]

Some characteristics of purple poodles:

Purple poodles can be found in politics, the judiciary, and various organizations. There, they do the bidding of women's organizations and thereby decorate themselves with the halo of supposed equality and humanism and become the willing tools of feminism. These pathetic figures, perpetually chasing each new societal trend, seem to not even realize how much of a fool they make of themselves through their self-abasement. Hovering in the orbit of feminists in politics, the judiciary and various organizations, one can always spot some abulic, socially motivated purple poodles, brainlessly supporting any feminist's mental excretions.[4]

Purple poodles are often to be found in information centres and "men's bureaus" where they engage in "work with men," "work with boys," and "gender research." If a father goes to such a bureau, seeking help because his child was taken away, the poodle working there will tell him that he probably beat his wife and that he therefore has to work on self-improvement. In so called "work with boys," boys are actually inculcated with gender stereotypes ("Men don't stand up to their feelings.") and any previously existing inferiority complex will be reinforced a thousandfold by constantly reminding them that their sex is inferior. These posts are usually held by men trained in social work and who are on the left of the political spectrum. These organizations typically receive public funding and support from feminist equality commissions; their whole purpose is to serve the feminist main stream and to present the feminist vision of masculinity. They are farther than anyone else from resisting the widespread discrimination against men and father. Their texts and web sites systematically exclude the many people and organizations who actually support men and fathers.

That the gentlemen responsible are thereby undermining their own existence is typical of a degenerate society in its decline. In an interview with Arne Hoffmann, René Kuhn gives deep insights into the role played by purple poodles, men who passively accept feminism, and quota women play in politics.[5]

One might expect gays to have less motivation to serve feminism as a purple poodle since they have no reason to impress female colleagues, fellow students, or superiors for sexual motives. Despite this, one runs into many gays who mindlessly regurgitate the state-feminist myth of the perpetually disadvantaged woman. This isn't too surprising, considering that the feminist mantra is daily repeated in the media, and most people aren't sufficiently politically interested to question the dominant narrative. This is also no surprise to the blogger behind Gay West, since "most gay organizations are located in the green-left part of the political spectrum, where feminism is a major player that is never questioned."[6]

An example of how a Purple Poodle reversed cause and effect:

That is, in the poodle's view, it is not feminists who are ideologically motivated and who have a closed world-view in which only female victims and male perpetrators exist. Rather, this is projected onto men.

Christian Schmidt
A man who expounds feminist views, or depending on the interpretation even someone who breaks the own ranks or simply criticises masculism, is often called a "purple poodle."
The user of the word usually aims at two ends:

This already shows the problems with this term. While group association is important to human beings because it played a major role in our evolutionary history, it shouldn't play any role in a debate, which is about who can produce the better arguments.

Those who use the "purple poodle"-argument, either want to enforce group discipline ("Don't diverge from our opinion, else we will treat you as a traitor and exclude you!") or they want to provide additional weight to their own opinion merely by ideological association.

Of course, categorizing a statement as coming from a particular world-view may facilitate its interpretation ("As X is closely associated with feminism, I assume that this or that statement is aimed at establishing privilege theory"). However, this should not serve to invalidate someone's opinion or to replace argument. [9]

Rosa Zelle
When I think about it, poodles are actually likeable and probably even quite intelligent animals. But as we know, masculists are of a different opinion; to them, the term "poodle," especially "purple poodle," is a term of abuse. Hinrich Rosenbrock wrote in his recently published report (...) To be sure, masculists aim at insulting all (in the widest possible sense) pro-feminist men. But when Rosenbrock writes about this term denying men their masculinity, then I think one shouldn't complain about that. After all, the fear of a loss of masculinity that is implied by this argument would mean remaining stuck in the restlessness of masculinist thought.
I, one the other hand, remain convinced that poodle are nice animals and that purple poodles are actually quite pretty. Even though the term is meant to be insulting, I don't feel insulted, merely amused. Maybe I'll even take to calling myself a "purple poodle" in the future.[10]

Criticism of the criticism

Christian Schmidt's criticism is justified insofar as he is warning against using the "purple poodle" accusation as a thought-terminating cliché[wp].

Even though the miss-use of the term can never be completely ruled out, the term "purple poodle" must not be interpreted as a replacement of argument. Manifold (Die Söhne von Perseus) puts it as follows:

However, the criticism is mistaken if it assumes that the feminist side is interested in argument and rational discourse. Feminism is marked by misandry, defamation, and lies. For one, take Alice Schwarzer, who in a televised debate called Esther Vilar a sexist and fascist and claimed that men have a higher life expectancy than women. Or consider the pay gap myth, the claim that "all men are rapists and child molesters" and the defemation of anti-feminists as "totalitarian" by Markus Theunert and as "right wing extremists" by Thomas Gesterkamp and Hinrich Rosenbrock.

The goal of the purple poodle is to not even engage in conversation with MRAs. Anyone who does do that runs the risk of being stigmatized and being weeded out as politically incorrect. That's why Markus Theunert, Thomas Gesterkamp and Hinrich Rosenbrock are unanimous in recommending to isolate MRAs/anti-feminists, to dismiss their arguments as "hateful propaganda" and to file their concerns under the header "struggle against the Right."

The in-/out-group argument shouldn't be used against critics of feminism, who are the very people trying to defend themselves against the closed in-group-argumentation of the feminist world-view.[11]

"Rosa Zelle" walked into the same trap that everyone walks into who has some third party explain to him, what someone else thinks. In reality, MRAs do in fact see poodles as cute and likeable animals. That is why "purple poodle" has been choosen as a term of endearment for pro-feminist men. But when it is claimed that a rather humorous term would "deny men their masculinity," this only serves to highlight the lack of humour exhibited by pro-feminist men. And the attribution of a "fear of loss of masculinity" only confirms the ubiqutuous misandry and the continuing disrespect of men, against which men are justifiably defending themselves.