Esther Vilar, born Esther Margareta Katzen (* 1935) is a German-Argentinian writer. She trained and practised as a medical doctor before establishing herself as an author. She is best known for her 1971 book The Manipulated Man and its various follow-ups, which argue that, contrary to common feminist and women's rights rhetoric, women in industrialized cultures are not oppressed, but rather exploit a well-established system of manipulating men. 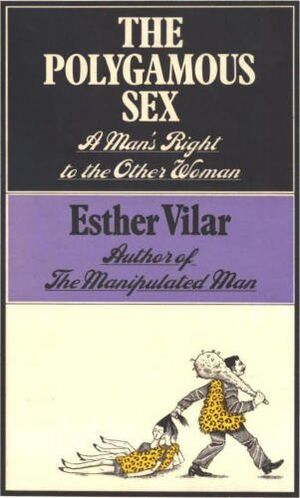 The Manipulated Man was quite popular at the time of its release, in part due to the considerable press coverage it received. The author Esther Vilar also appeared on The Tonight Show on 21 Feb 1973 to discuss the book. Controversy surrounding the book's main tenets led to the author receiving death threats in connection with them. In fact, comparative to Salman Rushdie's[wp] experience, she has reported that she has received decades of scorn:

The main idea behind the book is that women are not oppressed by men, but rather control men in a relationship that is to their advantage but which most men are not aware of.

Some of the strategies described in her books are:

Young boys are encouraged to be sexually uninhibited and associate their masculinity with their ability to be sexually intimate with a woman. Young girls however are raised to be sexually inhibited, and trained to believe that their self-image is negatively affected by sexual intimacy with men. As a result, girls grow up in an environment where men are actively and openly desiring sex, while women are not. A woman thus socially empowers herself to be the gate-keeper to a man's sense of masculinity.

Seemingly innocuous statements act as a means for women to conditionally engage in sexual intimacy as either reward or punishment for good or bad behavior; as opposed to simply pleasing the needs of one's partner. Women contend that they will be able to have sex when "in the mood", but will be unable to do so when "not in the mood". However, these statements are more clearly noted as "when you behave the way I want, then I'm in the mood and you will be rewarded with sex" and "when you don't behave the way I want, then I'm not in the mood and you will be punished by me withholding sex". Therefore, they simply act as a means of controlling their partner and conditioning their behavior to cater to their needs.

From a very early age, men are conditioned by both girls and their mothers to conform to social definitions and norms which women construct with their needs in mind. These definitions have one common element; they overplay the notion of a girl being emotionally and physically weaker than a boy, and a man being stronger than a woman. As a result, they use this excuse to give license to a woman to construct rules between the sexes that cater exclusively to her needs while ignoring any male needs.

The most common example is that of chivalry, dating etiquette and manners; all of which mandate that a man cater exclusively to a woman's needs while ignoring his own. A man is expected to first approach a woman, initiate a date, and initiate more intimate contact while bearing all risk of rejection. A man is also expected to pay for the cost of dating and maintaining the relationship, help a woman out of a car, open her door, take her coat, pull out her chair, help her sit, walk behind her while walking up the stairs in the event she falls, walk on the traffic-side of the sidewalk, and help her in other things she could normally do by herself. When a man does this, he is rewarded with praise by being called a "gentleman" or "well-mannered" and "knowing how to treat a woman". However, when he fails to cater exclusively to her needs, he is not praised, and in some instances is even scolded or vilified.

When a man sacrifices his personal life and passions so that his wife may stay home while he works to provide the costs of a household all by himself, he is rewarded with praise by being called "a good husband". However, if the man were to do the same thing as the wife, he would be called "a loser" or "a lazy bum".

As a result, women will often engage in displays of overly-dramatized emotional reactions to attempt to control men and get their way; much the same way they did as children when they were little girls. These displays include crying, whining, yelling, nagging, and being distant and silent until their demands are met.

By the same token, women will often try and make a man feel ashamed, bad or guilty for behavior that the woman does not agree to. For instance, if a man does not comply to her set of dating rules, she might call him a "jerk" or label him "cheap". She may try to vilify him and make him feel bad about his sexuality. She will scold him for seeing other women, but will expect him to "wait until she's ready" before they have sex. This is an attempt to make certain that the man has no other means to sex or sexual intimacy but her, and then, to sexually starve him and use sex as a reward for good behavior; such as saying "I love you" or making a relationship official and other acts of commitment. She may even tell him that she has a one month rule, and if he will not agree to that, then he "doesn't respect her"; as this allows her to ignore his desires and rid herself of any pressure to respect him.

Women will also assert a sense of moral superiority over men in an attempt to suggest that all things female are right and all things male are wrong. References to the violent tendencies of a few men will be used to support such an argument. However, careful examination of the entire male population clearly fails to lend such support to an argument that depends on cherry-picking. An overall view of the entire female population on the other hand shows perversion of sex as a tool to be used in a manner identical to a prostitute, selfishness, self-serving intentions and motives, lack of care or consideration for their romantic partner, a disgusting lack of empathy and love, laziness, lack of genuine ambition and thirst for creativity and knowledge. Nevertheless, men are conditioned from a very early age to agree to the view as women as "the fairer sex".

A woman will want a man to be exclusive to her in a relationship, not because she cares about losing him to another woman, but because she wants to more easily control him. The conditional statements she makes are designed to be unquestioned, morally sound, and mask her real intentions under the guise of love. "If you love me, then you won't have sex with another woman". She is not interested in exclusivity so much as her being the only one he can turn to for sex and sexual intimacy. If his actions cause her grip over him to weaken, she makes him feel guilty by feigning that he has emotionally hurt her and labeling him a "cheater".

Men are also trained from a very early age to view marriage as the ultimate goal of any relationship. However, a man has nothing to gain from marriage. It is instead left unexamined by men, why they should take pride in asking a woman to marry him. Women simply contend that it is the ultimate gesture of true love, and that nothing could be more romantic. In an effort to please women and cater to her happiness, men feel a strong desire to get married. However, a woman's goals are different.

Marriage is simply a way of making it nearly impossible for her workhorse (man) to leave her, and allow her to no longer put in the effort of trying to keep him around. She wants the legal right to half of his assets and income, and support for the children should he decide to leave her. When men try and cater to her romantic desire for marriage under the guise of love but try and isolate it to just love and no financial or legal aspects involved (i.e. a pre-nupt), a woman will always object. She will do her best to hide behind the guise of love and romance, claiming "if you really love me, then you won't need one" and "it's unromantic, there is no yours and mine, just ours". However, her intentions are anything but romantic. She wants security, the financial and legal security that a marriage with no pre-nupt provides her.

A revised version of the book is currently in print. Her play Speer (1998) is a work of fictional biography about the German architect and has been staged in Berlin and London, directed by and starring Klaus Maria Brandauer. She has also written many other books and plays, but most have not been translated into English.