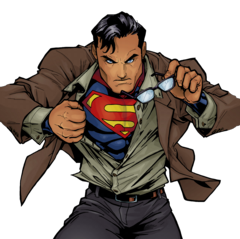 Newspaper reporter Clark Kent turns out to be reckless champion of law and justice in the form of Superman.

The hero is provided with extraordinary powers called Superman was invented in the early 1930s of the two two U.S. teenagers Jerry Siegel[wp] and Joe Shuster[wp]. But the word superman then existed in the English language much longer - as a translation for Übermensch, which Nietzsche[wp] had embossed in 1893 "Also sprach Zarathustra" for its ideal of a future human being who transcends christian moral values.

The earliest document in the "Oxford English Dictionary"[wp] (OED), dates back to 1894. Since it was mentioned in the New York social philosophical journal "Forum", the "cosmic 'super-man' of the future". Superman but only really became popular by George Bernard Shaw's essay "Man and Superman" from 1903. The first translation of Nietzsche "Thus speak Zarathustra" then appeared in 1909.

The OED explains, the word is superman contaminated as a philosophical concept since the 1930s a bit by the comic books, which is why this tendency in academic and philosphischen circles, rather just the German word übermensch (sometimes with, sometimes without umlaut: uebermensch) to use when it comes to Nietzsche.[1] 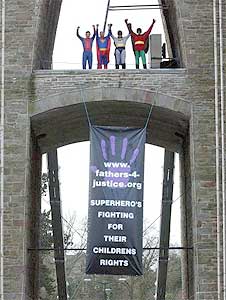 Fathers are for children often heroes, so they fight dressed up as Superman[wp], Spiderman[wp] and Batman[wp] for their children.[2] 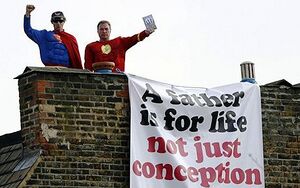 Activists of Fathers 4 Justice were on the roof of the house of Labour leader, Harriet Harman, London at Heathrow Airport[wp][3] 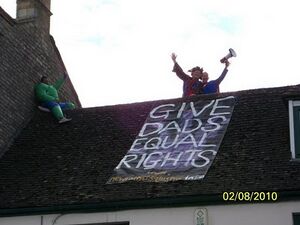 Fathers are for children often heroes, so they fight dressed up as Superman[wp], Spiderman[wp] and Batman[wp] for their children.

The best-known fathers' rights activists are Fathers 4 Justice from UK.