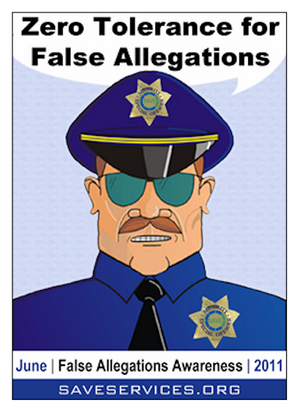 A false rape allegation is a fabricated allegation of sexual assault, usually because of the accuser's mental illness[kw] or out of vengeance. An accusation is a weapon of power that gives a girl instant attention, boosts her social status, and allows her to avoid being called a slut.[1][2] Unfortunately, the frequency of false rape accusations[3] is making it increasingly necessary to take steps[4] to prevent the accusations and mount an effective defense in case an accusation is made. Individual cases are being reported in the manosphere[5][6] and a police officer's story is also available.[7]

Dick Divorco notes that the common denominator of false rape accusations is that the false-accusers do not want repeat sex with the accused.[8]

Sam Seau[kw] has posted a litmus test for examining rape accusations. Key criteria include a lack of violence, an invitation to her place or willingly joining him at his place, and belated reporting of the "crime."[9]

Roosh V[kw] has argued that all public rape allegations are false[kw].[10]

Roosh V[kw] notes that women will emotionally turn after the high of sex, and that the man should be prepared to stand firm and maintain his frame if and when the moment comes that she turns hostile:

It's not uncommon for American girls to "flip" after sex and make a 180 degree turn once her emotional high of attraction comes down. She can go immediately silent, ask you to leave, start crying, or get angry. I've had degrees of all four happen to me, leaving me in a stressful state on how to deal with a girl whose feelings could bring the judicial hammer upon my head even though I didn't do anything wrong... The best thing you can do when a girl flips on you after sex is be firm and mature. In other words, act like a stern father whose insolent child is throwing a temper tantrum. Don't escalate the encounter into nuclear war, but don't lay down and let her get away with acting silly.[11]

Jon Anthony[kw] recommends steps which build an effective defense before the accusations ever occurs—such as keeping records of all communication—actions to avoid at all costs—such as contacting the accuser—and steps to take after the accusation has been made—such as hiring a good lawyer.[12]

Remain calm. Collect yourself. Know you do not have to answer any questions from police without the presence of an attorney. Cooperate with police, but tell them: I am happy to help you, officer, but I want to do that in the presence of my attorney. Even if you are telling the truth, it's recommended you do all communicating with police about such a serious matter through while your legal counsel is present. A misstep or a misstatement on your part could lead to a false conviction. Those with experience in the law will be able to safely guide you through all the potential landmines. Know that only 7% to 13% of reported rapes end up in a conviction in the U.S. Trials require evidence, and the odds are on your side if you committed no crime.[13]

The phenomenon of false rape allegations is an ultimate feminist taboo; indeed, leading feminist legal theorist Catharine MacKinnon has stated that "feminism is built on believing women's accounts of sexual use and abuse by men." In some instances of political correctness run amok at universities, students and professors have been accused of "harassment" for so much as raising the possibility of false accusations in class or in online discussions.

The fact remains that women do lie about rape much more often than the feminist party line allows. Advocacy literature typically claims that about 2 percent of rape complaints are found to be false, the same rate as for reports of other violent crimes. But that figure seems to have no basis in research. According to the FBI, about 9 percent of rape reports are dismissed as "unfounded," without charges being filed.

In a particularly controversial study published in 1994, now-retired Purdue University sociologist Eugene Kanin found that 40 percent of rape reports filed in an Indiana town over a 10-year period turned out to be false by the "victim's" own admission.

When Congress passed the 1994 Violence Against Women Act expanding federal protections for rape complainants, congressional reports justifying the legislation cited statistics on the low rate of convictions in rape cases - based on the assumption that every rape report was true and every man accused was guilty.[14]