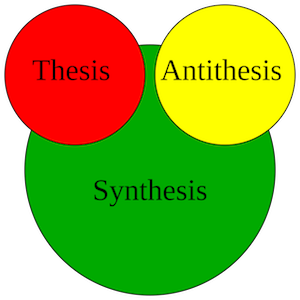 Hegelian dialectic consists of thesis[wp], antithesis[wp] and synthesis[wp]. The thesis is incomplete in itself and thus demands a negation - the antithesis. This conflict is solved by synthesis.

For Hegel[wp] the synthesis has a deeper meaning than for Fichte[wp]. It does not limit the contrast, but cancels it. For Hegel, lifting up has a threefold meaning: negate (tollere) - lift up (elevare) - preserve (conservare). Thus it overcomes the conflict by bringing the truths of thesis and antithesis together on a higher level. And from the resulting synthesis becomes a new thesis, which in turn demands a new antithesis.[1]

The dialectical three step of thesis, antithesis and synthesis has two decisive moments:

Weighing up thesis and antithesis

The main task in forming public opinion is to first present possible arguments for the thesis and the antithesis and then to attempt to arrive at a well-founded result in the synthesis in a way that is as objectively balanced as possible.

It should be noted that logically, the thesis cannot simply be repeated here: The arguments of the antithesis must be taken into account and evaluated accordingly. This can take the form of a compromise, but it is also possible that the position that one tends to support (in the sense of the principle of increase: the thesis) is at least put into perspective).[3]

WikiMANNia sees itself primarily as a collection of material and not as a "temple of truth". WikiMANNia wants to offer the antithesis to the thesis in a dialectical sense, whereby the readers have the task of forming the synthesis (in the sense of their own opinion). The thesis is mostly the mainstream, while the antithesis is the dissenting opinion, which is increasingly endangered in Germany.[4]

Please start your reading on WikiMANNia with our main articles: