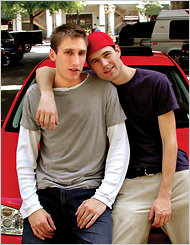 Michael Glatze (* 1975[2]) was co-founder of Young Gay America (Y.G.A.) and a former advocate for gay rights. Glatze received media coverage for publicly announcing he no longer identified as a homosexual and denouncing homosexuality. 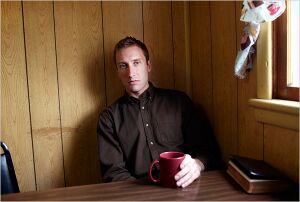 His mother was a non-denominational Christian[wp] and his father was agnostic[wp].[4] His father died of a heart condition when Glatze was age 13, and his mother died of cancer when he was 19.[5] At age 20, he declared himself openly as a homosexual. At 22 he becomes publisher of the first magazine for young homosexuals.[6] Glatze earned a bachelor's degree from Dartmouth College where he majored in English Literature and Creative Writing, with a minor in Music.

While working at XY Magazine[wp][7] in San Francisco, Glatze met Benjie Nycum. The two would end up being boyfriends for 10 years. They later co-founded in december 2004 their own publication Young Gay America[wp]. Glatze and Nycum coauthored the book XY Survival Guide.[8]

Glatze turned toward Christianity after a health scare due to heart palpitations[wp][2] and changed after several years of intense self-reflection his attitude to the phenomenon of homosexuality. He has written two articles about his change for WorldNetDaily in 2007.[9][10][11] He left Y.G.A. in 2007. The magazine stopped publication soon after.

Glatze joined The Church of Jesus Christ of Latter-day Saints[wp] in the first half of 2007[12] but left shortly thereafter.[2]

2005 Glatze was quoted by Time Magazine:

"I don't think the gay movement understands the extent to which the next generation just wants to be normal kids. The people who are getting that are the Christian right." [13]

Ben, his ex-gay-friend, about him:

"Christian fundamentalists should burn in hell!" he told me once, slamming his fist on his desk. I had never met anyone so sure of himself. Many young gay men looked up to him. [1]

"Homosexuality is a cage in which you are trapped in an endless cycle of constantly wanting more - sexually - that you can never actually receive, constantly full of emptiness, trying to justify your twisted actions by politics and 'feel good' language." [1]

He was one of the leaders of the movement for "gay rights" can, he pop the largest gay propaganda lie, namely the claim that homosexuality is "innate", a "variant of nature" or even a "creation variant of God". And for that he is hated by the gay ideologues.[6]

After ten years in the gay Glatze must have been aware that his exit - and especially the rigor of it - come and hurt colleagues and friends on the head would. After his conversion, he had to deal with hostility and decided to dive. He said at the time:

"In my opinion, the outbreak of the influence of the homosexual thoughts was the most liberating, beautiful and astonishing thing I've ever experienced in my life."

Two years later, he has reiterated. In an interview with the news site LifeSiteNews he tells of his new life. He still regularly visit the church, take more and more distance from homosexuality and is now even meet with women. He had fun with his new life. The hostility of the homosexual scene would hurt him then.

"The fury that comes from gay people against people like me can be vicious and vile, and it can hurt. They stop at nothing to make me feel ashamed for my current stance on homosexuality, and to try to make me doubt what I have experienced in my life." [14][15]