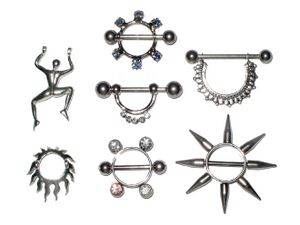 Note that in general nipple shields serve an aesthetic rather than practical purpose, but nipple shields are available which push out the nipple and stretch it (see the nipple stretcher and nipple trainer entries). Nipple piercings saw a massive upsurge in popularity when Janet Jackson[wp] revealed hers on live television, prompting a humorous national furor.[1]

A nipple shield is a piece of body jewellery worn on the nipple, partially or fully covering the areola. The shield part of the jewellery encircles the nipple, and can be held in place by various means, such as adhesive, suction, or friction, but is most often held in place by a nipple piercing. The primary intent of a nipple shield is usually to lift, adorn, and ornament the nipple and/or the breast, in the same manner as other body piercing jewellery. A nipple shield can also be worn to smooth the transition between nipple and breast, so as to disguise the protuberant feature and present a smoother clothed profile.[2]

There are nipple shields made of silicone, which are used in nursing babies.