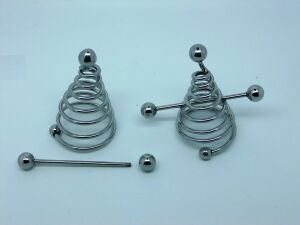 Nipple Stretcher and Clover Clamps are a perfect match for nipple games. 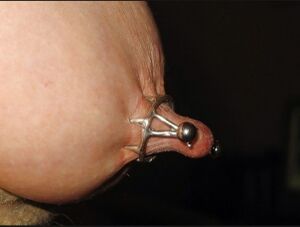 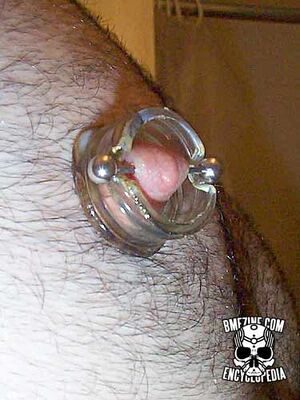 Homemade nipple stretcher from the neck of a plastic bottle

Nipple stretching is a term for modifications which either increase the bulk of the nipple, lengthen it, or both. A few methods are in use [...][4]

A nipple coil is a spiraling piece of nipple jewellery designed to both lift and extend the nipple (usually for the purpose of nipple stretching) and to be decorative as well. Some nipple coils have a distinct place for the nipple to rest (like the crossbar in the pictured example), and others allow the jewellery to be rotated through the piercing so any desired amount of lift can be achieved.[5]

A nipple trainer is a specialized form of nipple shield that acts similarly to a nipple stretcher but has a variable height. The height is usually selected by adjustment screws which allow two (or more) plates to be forced different distances apart. While they are commercially available, due to the simplicity of the design the vast majority of nipple trainers tend to be homemade (as in the pictures below).