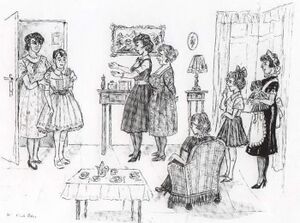 Boy in petticoat with female relatives

Pinaforing, also called petticoating, is a type of forced feminization that involves dressing a boy in girls' clothing.

There is some evidence that "petticoat punishment" has occasionally been used as a form of discipline, with credible stories of such going back at least to Victorian times[wp]. "Petticoat punishment," as a sexual fetish interest, involves imagining or reenacting this scenario. However, as a fetish interest, these activities are usually heavily exaggerated and sexualized, including elaborate humiliation and public nudity. They often involve the male being feminized into a sissy by a powerful female presence (often a mother or aunt) in front of his cousins, sisters, or in some cases, girls of his own age whom he had offended by his boorish behavior. Petticoating roleplay may include being forced to wear makeup and to carry dolls, purses, and other items associated with girls.

Petticoat discipline also occurs in the context of some marital relationships, as a means by which a wife may exert control over her husband. This may involve various items of feminine clothing or underwear in a variety of contexts, ranging from the husband having to wear a feminine apron around the house whilst performing household chores, to the wife insisting that the husband wear a brassiere on a full-time basis under ordinary male clothing. In all such circumstances, there is a strong reliance on the element of humiliation, whether actual or potential, should the husband's secret be discovered.[1][2]