Rape Culture is a 1975 film by Cambridge Documentary Films[wp], produced by Margaret Lazarus[wp] and Renner Wunderlich[wp]. It was updated in 1983.[1] 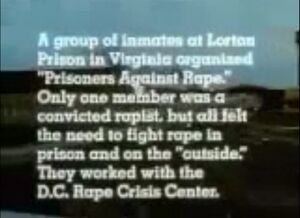 Opening titles showing text
"A group of prisoners at Lorton prison Virginia organised 'Prisoners Against Rape'. Only one member was a convicted rapist, but all felt the need to fight rape in prison and on the 'outside'. They worked with the D.C. Rape Crisis Centre." 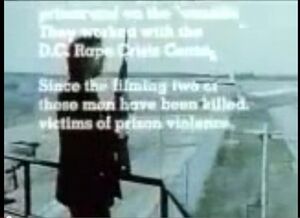 Opening titles showing text
"Since the filming two of these men have died as victims of prison violence."

Note: The opening credits of the film, released January 1975, inform the audience, that in the few months from filming to release, 2 members of PAR had died in prison due to Prison Violence. The Credits also make clear that only one member of Prisoners Against Rape (PAR) was a convicted rapist. Many feminists have since claimed that all members of PAR were rapists, a claim not supported by independent sources.

Rape Culture is a 1975 film by Cambridge Documentary Films[wp], produced by Margaret Lazarus[wp] and Renner Wunderlich[wp]. It was updated in 1983.[1]

Following a public viewing of the film, January 1975, Judy Norsigan outlined how the film illustrated the concept of "rape culture", through the voices of men and women, including rapists, victims, prisoners, rape crisis workers, and the media.[3][4]

The film featured "Prisoners Against Rape Inc." (PAR)[5], a not-for-profit organisation founded by William Fuller and Larry Cannon on September 9, 1973 in conjunction with women fighting rape.[6][7] The prison administration "approved" self-help status.[8] Fuller and Canon wrote together and Fuller also had evidence placed before congress.[9]

PAR was set up after Fuller wrote to the DC Rape Crisis Centre in 1973 and asked for assistance. The DC Rape Crisis Centre had opened in 1972 in response to the high incidence of rape against women of colour. Fuller acknowledged his history of rape, murder, and prison rape. He wanted to stop being a rapist. This resulted in a co-operative effort.[10]

The women from the DC Rape Crisis Centre who initiated work with PAR were Loretta Ross, Yulanda Ward and Nkenge Toure.[10] Ross has said that whilst the relationship was seen initially as controversial, it was one of the more interesting aspects of her work at the DC Rape Crisis Centre. In 1974 PAR published a book titled "Prisoners Against Rape:Capitalist Economics Breeds Rape, Robbery, Murder, All Other Crimes".[11] They were also working with the Feminist Alliance Against Rape (FAAR) "with the short-term goal of getting these men out into the community to do speaking and to educate other men. We also hope to work with them to conduct consciousness-raising and political education in prisons and halfway houses."[12]

In interview with Joyce Follet, Ross observed that in the work of the DC Rape Crisis centre they could bandage up women all they wanted to, but if they did not stop rape what was the point.[10] Maragaret lazarus, the films producers said of this relationship that the work was "groundbreaking".[13]

The film featured Mary Daly, radical feminist philosopher, academic, and theologian, and Author and Artist Emily Culpepper. They discussed rapism as an intellectual concept, and phallocentric morality and "its "unholy trinity of rape, genocide and war."[4]

Doreen McDowell, a rape victim, talked of her experience, how sex fantasies play a part in rape, and how male identified behaviour in women maintained a "state of siege".[4] Powerful statistical evidence, refuting rape myths, law enforcement and legislative views of rape were presented by Joanna Morris, author and statistical co-ordinator for rape crisis centres across the USA.

The film also looked closely at the mass media, how film-makers, song writers, writers and magazines perpetuated the attitudes to rape, which normalised it and even perpetuated rape myths and stereotypical behaviour around rape. Gone with the Wind[wp], Alfred Hickcock's film Frenzy[wp], and Hustler magazine[wp] were some of the media used to illustrate the normalisation of rape.

In describing the film, the producers say that it attempts to give real and accurate limits to rape and expand society's narrow and sexist concepts of rape.[14]

Lazarus has said of the film's title that it came from long discussion about what the film was trying to illustrate.[15] She has also expressed the view that the film is the first time "rape culture" was used in its widest accepted sense.[1][13] Dr Joyce E. Williams, writing for Blackwell Publishing Inc, Willey-Blackwell also attributes the definition of rape culture to the film.[2] This is the only claim made as to orogin and attribution by any academic source that is verified.