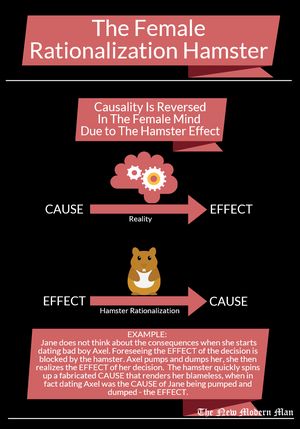 Rationalization Hamster is a creature which lives in a woman's brain, and feverishly spins the hamster wheel[wp] which helps her rationalize and justify her thoughts, behavior and actions regardless of how counter­intuitive they may be. No amount of logic[wp] or reason[wp] can stop the hamster from spinning. Coined by the blogger Roissy. Her hamster will (for example) become apparent when she REFUSES to acknowledge the possibility that a man is simply not interested in her. She will convince herself "he's a jerk" or "he must be gay" rather than accept the truth. The dialogue in her own head has no place in reality. The hamster also convinces "strong and independent" women who openly declare they "don't need a man" (while simultaneously seeking one) that men are somehow "intimidated" by them ... instead of accepting that she is best left to be "strong and independent" on her own for as long as possible. Preferably forever. - MGTOW Glossary[1] 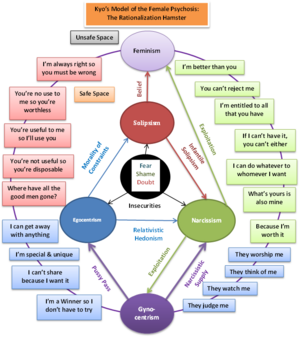 The Rationalization Hamster - Kyo's Model of the Female Psychosis

Rationalization hamsters are thought to be a key component in producing liberal scholarly works, particularly those of feminism. Young, liberated women often rely on it to explain their attraction to the asshole who is going to pump and dump them, as well as their contempt for the nice guy who, unaware of the hamster within, strives fruitlessly to gain their true love. Older, liberated women also rely on it for dumping their husbands and using the resulting child support money on jewellery, cars and/or crack. - Urban Dictionary[2]