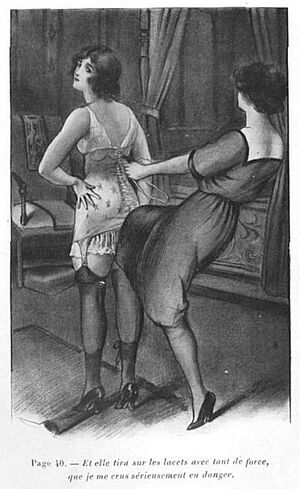 Tightlacing (also called corset training and waist training) is the practice of wearing a tightly-laced corset. Tightlacing is done for extended periods (12 to 23 hours a day) to achieve extreme modifications to the figure[wp] and posture[wp], and for shorter periods to temporarily shape the torso and experience the sensations of a very tight corset. Tightlacing had its heyday in the Victorian era[wp] and the first half of the 20th century.

The most frequent aim of tightlacing is a slim waist. Depending on the silhouette desired, the shape of the rib cage[wp] may be altered as well. Wearing a corset can also change the bustline, by raising the breasts upwards and shaping them, flattening the stomach, and improving posture. However, these effects are only temporary and will be lost on removing the corset. Indeed, excessive corset wearing has been claimed to weaken certain muscles, making it more difficult to maintain posture without a corset.

Although some tightlacers aim to get their waists as small as possible, others prefer to reduce their waists to a certain point and go no further as they consider that proportion and aesthetics are more important than achieving the smallest possible measurement. For example, cross-dressing[wp] males often seek to create a more feminine-appearing waistline through tightlacing, but do not want to make their waists too small, as this would look unnatural.

Corsets are worn by women and men, but are generally more common for women.

Tightlacing of males is encountered in cross-dressing[wp] and in forced feminization to reach a more feminine appearace. There was also a period from around 1820 to 1835 when an hourglass figure (a small, nipped-in look to the waist) was also desirable for men; this was sometimes achieved by wearing a corset.[1]

An hourglass corset[wp] from around 1890. It features a busk[wp] fastening at the front and lacing at the back.

The term tight-lacing refers to the laces that tighten a corset. There is no generally accepted definition of what constitutes tight-lacing since it could be argued that any corset that is not loose is tight. Furthermore, there is no agreement as to how tightly corsets were usually laced. Some nineteenth-century writers argued that any use of the corset was dangerously unhealthy, whereas others tolerated or praised "moderate" corsetry, reserving their criticism[wp] for tight-lacing, however this might be defined. When they mentioned measurements at all, they variously defined tight-lacing as a reduction of the waist by anywhere from three to ten inches. That is, depending on the definition, a natural waist of, say, 27 inches might be reduced to a circumference of anywhere between 24 inches and 17 inches.

John Collet's[wp] caricature Tight Lacing, or Fashion Before Ease (1770-1775) depicts a fashionable woman clutching a bedpost, while several people tug strenuously at her stay laces. Anyone who has seen the movie Gone with the Wind[wp] (1939) can picture Scarlett O'Hara[wp] in a similar situation, exclaiming that if she cannot be laced down to 18 inches, she will not be able to fit into any of her dresses.[2]

Tightlacing has been defined in different ways by various sources. Most commonly it refers to either

When reading or hearing this word, be certain that you understand the author's or speaker's use of it.[3]