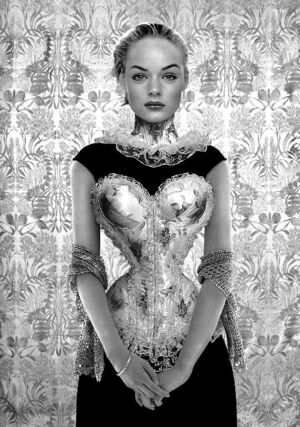 A corset (from french corset, originally a diminutive of old french cors "body") is a stiff piece of garment belonging to the undergarment, which fits tightly to the upper part of the body and is supposed to shape it according to the current fashion line. Therefore, the corset changed shape and cut several times over the centuries; the methods of stiffening changed with the progress of technology.

A corset is a garment worn to mold and shape the torso[wp] into a desired shape for aesthetic or medical purposes (either for the duration of wearing it, or with a more lasting effect). The practice of wearing tightly-laced corsets for extended periods to achieve extreme modifications to the figure is called tightlacing.

Many garments sold as "corsets" during recent years are not technically corsets in the traditional sense. While modern "corsets" and "corset tops" often feature lacing and/or boning and generally mimic a historical style of corsets, they have very little if any effect on the shape of the wearer's body.

An overbust corset encloses the torso, extending from just under the arms to the hips. An underbust corset begins just under the breasts and extends down to the hips. A shorter kind of corset, which covers the waist area (from low on the ribs to just above the hips), is called a 'waist cincher'. A corset may also include suspenders to hold up stockings (alternatively a separate suspender belt may be worn for that).

Corsets are typically constructed of a flexible material (like cloth, particularly coutil, or leather) stiffened with boning (also called ribs or stays) inserted into channels in the cloth or leather. In the 19th century, steel and whalebone were favored for the boning. Featherbone was used as a less expensive substitute for whalebone and was constructed from flattened strips of goose quill woven together with yarn to form a long strip (Doyle, 1997:232). Plastic is now the most commonly used material for lightweight corsets, whereas spring or spiral steel is preferred for stronger corsets. Other materials used for boning include ivory, wood, and cane. (By contrast, a girdle is usually made of elasticized fabric, without boning.)

Corsets are held together by lacing, usually (though not always) at the back. Tightening or loosening the lacing produces corresponding changes in the firmness of the corset. Depending on the desired effect and time period, corsets can be laced from the top down, from the bottom up or two laces were used to lace up from the bottom and down from the top to meet in the middle. It is difficult - although not impossible - for a back-laced corset-wearer to do his or her own lacing. In the Victorian[wp] heyday of corsets, a well-to-do woman would be laced by her maid, and a gentleman by his valet. However, many corsets also had a buttoned or hooked front opening called a busk. Once the lacing was adjusted comfortably, it was possible to leave the lacing as adjusted and take the corset on and off using the front opening (this method can potentially damage the busk if the lacing is not significantly loosened beforehand). Self-lacing is also almost impossible with tightlacing, which strives for the utmost possible reduction of the waist. Current tightlacers, lacking servants, are usually laced by spouses and partners. 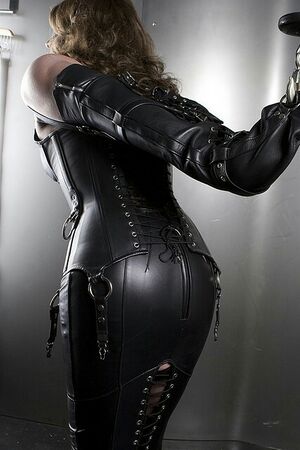 Black Monoglove in combination with leather Corset and Hobble skirt 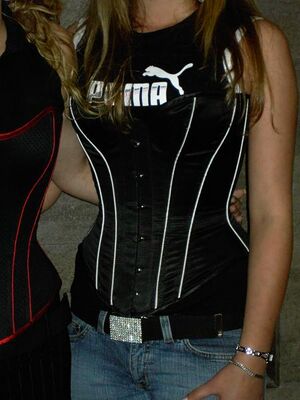 Black corset for the disco visit 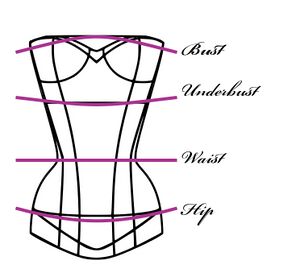 How to properly measure the corset.

Measuring for a corset is the same as measuring for a bra. If you take the wrong body measurements, the corset might be uncomfortable or create bulge. So that the corset fits properly and comfortably, you should be honest, don't guess and measure properly!

An off the peg corset is designed to reduce your waist size by 4-5". If you're looking for more of a reduction you need to start waist training which takes time as its a permanent waist reduction.

Stand straight, no holding your tummy in - natural position, please! The tape should be snug - not tight enough to cause any bulging of your fleshy bits and not loose enough to slip a finger behind. Snug.

Wrap the tape around your waist (the smallest part of your torso; below your ribs and above your hips). If you find it difficult to wrap a tape measure around yourself or can't seem to get the grip of it, use a piece of string, wrap it round you and then measure it straight along a metal tape measure afterwards. this also works if you don't have a fabric tape measure. Alternatively ask a good friend to help or ask at a good tailors or wedding dress shop.

Off-the-rack (OTR) and Ready-to-wear (RTW) corsets are differentiated from custom corsets in that they are designed and built in standard sizes categorized by waist size only. There are myriad OTR/RTW corsets on the market that cater to a variety of body types. Be certain to research the various OTR/RTW products available to determine which is best for your particular body. Also be aware of the fact that the vast majority of OTR/RTW corset manufacturers sell corsets in even-numbered waist sizes (i.e. 24", 26", 28").[2] 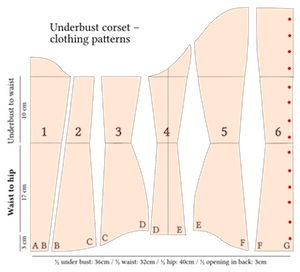 A clothing pattern to make a under-bust corset

Before and after effect 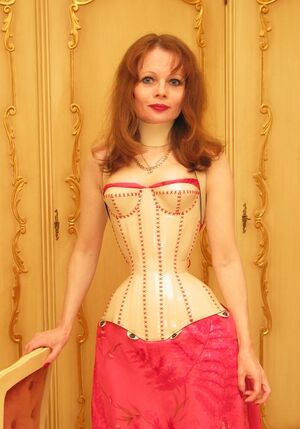 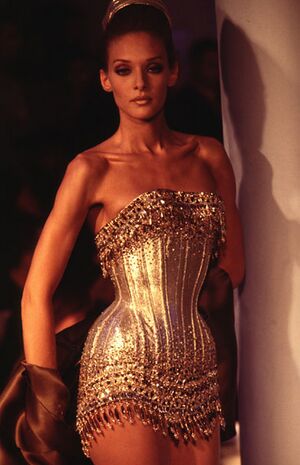 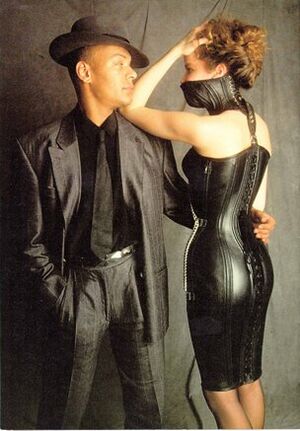