The betaization process is the process by which the woman turns the man from an alpha to a beta.[1]

Why would a woman even do this when she likes alpha males? Well, this is the paradox of women: Sexually attracted, of course, by an alpha (strong, independent, can't be told, assertive, leader type, etc.) - but for the offspring and her own (non-sexual) well-being as well as that of her children, a beta male is more suitable (provider, can be ordered around according to her own wishes, etc.). Of course you have no respect for a Beta Man, which is why you only want to have the absolute minimum of sex with him. This is also the reason why there is more sexual activity in the bedroom before a marriage (man tends to be an alpha) than after the marriage (man becomes a beta through the betaization process). 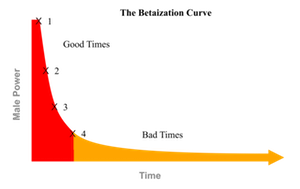 The betaization process happens imperceptibly and unconsciously in small steps and is inherent in every woman's nature. It cannot be reversed (Say: If someone has lost respect for you, you will not get it back). The aim of the man is - since he is aware of this process - to let it progress as slowly as possible or even to stop it - it is not reversible.

The graph (right) shows how much a man has to say in a relationship over time - at the beginning still a lot, but in the long run almost nothing more. This steep slide applies to every man, so he has to recognize the signs and stop. Alternatively, you can of course end the relationship.

There are a total of 4 phases that this process goes through.[2]

I've been talking a lot on the phone with Bliss lately, discussing the Betaization Process and how it manifests in relationships. It was especially poignant for him, having just exited a 2-year relationship where he was heavily beta'd to the full extent of the curve. Being that the dude is a player, he is back on his feet now like some mad wolf, and he had a lot to say to me on the phone regarding my relationship, since I've just passed point 3 on the curve, which we will be explaining in this post.

This dynamic is called the Betaization Process because it is the process of the woman making you into a beta male over time. Since by definition the "alpha male" is the one with the sexual choice, your power takes a sharp hit as soon as you start seeing a particular woman more than once, since you are actually decreasing your own sexual choice.

Brilliant minds such as Franco on FastSeduction.com as well as the other relationship savvy posters on that board have long discussed the Betaization Process, why it happens, and how to slow it down. A consensus has emerged:

Another hugely important point that is often overlooked is that you yourself also have biochemical cues stored on the DNA master tape that will drastically alter your behaviour in accordance with the betaization process. Since you only have control over your own behaviour, this post explains the critical points in the relationship and how best to handle them on your end to slow down (but not stop) the progress of the curve.

Points on the Curve Explained

While the betaization process cannot be stopped, there are specific points in the relationship that will determine the speed of decline of the man's personal power in the relationship. At these points, certain gambles can be applied which can have 3 possible outcomes:

There is another option that can be applied at any time: You end the relationship. Don't forget that you always have that option. Also don't be surprised when you are so biochemically blinded by your own emotions that you DO forget you have this option.

The points on the curve are described as follows (and there are likely more that I've missed).

The period of flux on the graph before point 1 is reached symbolizes the Circuit II domination/submission game that got her (and you) attracted in the first place. The exclusivity agreement symbolizes the end of this period, and the beginning of Circuit IV socio-sexual conditioning for child-rearing. This point marks your entry onto the curve. In biological terms, it symbolizes a decision to pair-bond and raise a family. The betaization process arises from this switchover of prerogatives.

The contract is entered explicitly (by verbal agreement) or implicitly (by spending the majority of your sexual time with her).

Gamble: Refuse to enter the contract by continuing to see/sleep with/flirt with other women. Possible results:

However, the more time you spend with her, the more you will be put on the curve anyway. Your behaviour will be modified to the point whereby:

i) You are simulating exclusivity by spending so much time on her.
ii) She can continue her betaization behaviours by ASSUMING that you ARE exclusive, which in turn actually forces you back on the curve! (VERY common).

Eventually, no matter how much you delay it, if you spend enough time with a woman, you will end up at point 1 on the curve. She will eventually force a point 1 conversion by openly asking if you are exclusive (if she hasn't already ASSUMED you are).

This is the point whereby she solidifies the exclusivity using a few ritual behaviours:

All these behaviours can seem "cute" and "adorable". You are wired to find it cute so that the betaization process can continue unhindered in order for you to raise a child. But make no mistake in what she is doing at this point: She is putting on the shackles to keep you locked into the curve.

You can buy a lot of time using this strategy depending on the woman and what strategies her friends will be enforcing with her. This strategy causes a lot of headaches and drama however, and you must be extremely emotionally resilient (or conscience-free) to pull it off. Plenty of guys do it. Most guys can't however and will HAPPILY settle for exclusivity with one woman because they believe it leads to an easy life of sex on tap and no headaches. It doesn't. Part of the point of this post is that the "good life" with a woman is a fallacy. Even the "good ones" are just operating slower versions of this curve.

The girl knows that if she wants to keep a guy around, she'd better make the deal pretty sweet, and that means providing lots of sex. However, the further down the curve you go, the more invested in her you have become, and she realizes one day that she can deny you sex (often due to a seemingly good reason, e.g. period pains, or she was asleep etc.) and you won't leave.

So far you have accepted the terms of the deal based on the idea that you will get sex on tap. Now the well is drying up. If she successfully denies you it once and you haven't broken up with her, the behaviour of withdrawing sex whenever she wants has begun to be conditioned as an acceptable behaviour. It will start out for "valid" reasons as explained above, but when she sees that it affects you emotionally, the idea that she can use withdrawal of sex as a weapon against you emotionally will be instilled and denials will increase in pace over the next few months. Slowly at first, so you don't really notice or mind much. But it WILL pick up pace. She now has control over the one thing that really got you in the deal in the first place. However now you are so emotionally invested, you have other things at stake and will want to stay with her even with sex drying up.

You must fight hard in the early months to never allow her to deny you sex. Saying "no" but then giving you sex anyway is fine. Her first successful denial of sex from you marks the real turning point in this particular dynamic.

Gamble: Tell her to never deny you sex again.

Anything you see in a typical bad marriage is symbolized by this area on the curve.

Gamble: None, you're fucked. All you can do is fight her attempts to disrespect you, in an effort to slow down their increase in severity.

If you want the good times back, go and find another woman.

Even if you have affairs at this point, you can't move her backwards on the curve, since you are simply starting new curves with other women (drama warning!). If she finds out, she will simply use the affair to weaken you socially and financially to move you even FURTHER along the curve.

Luckily I have never been this far down a curve, and I never intend to be. But after spending enough time with any particular woman, you will end up this far down the curve.

Shape of the Curve

I have used a long-tail curve for this graph. I was originally going to use the same curve but inverted (power decreasing slowly at the start then picking up pace). I realized however that the curve takes a SHARP dip the moment you enter into exclusivity, since by definition you are beta because you have reduced your own amount of sexual choice.

Your goal is to make the "Good Times" section last as long as possible using your curve-fighting gambles and countermeasures. For pussy men or men who are simply clueless about male-female dynamics, the Good Times can sometimes last a few days at most. We all know guys who have "fallen in love too quickly" (leapt right down the curve) and who are owned within a few weeks of meeting a woman.

With skill however you can increase the Good Times to long periods - months or even years. It really depends on your knowledge of this framework, the type of woman you are in a relationship with, and the skill with which you apply the gambles.

Being Beta: Is it so bad?

As long as you are in the "Good Times" section of the curve, the relationship can still be enjoyable. However, the danger of staying on the curve so long is that you forget what it's like to NOT be on the curve. The curve is essentially a series of thought loops you enter every day, all of which revolve around the woman. Not having a relationship certainly frees you from these thought loops.

The question is, what's more important to you: The comfort level achieved by the relationship, or the freedom of not having your behaviour and mental space controlled by circumstances you have created?[1]