Chastity belt for the male from Latowski[2]

[See an example on the left.] 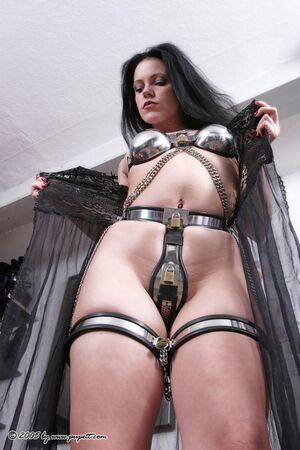 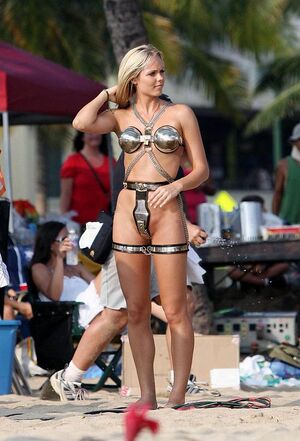 Chastity belt with thigh bands on the beach

With time passing, she may get more and more used to the unusual feeling of the (sometimes rather heavy) chastity device, but on the other hand may get irritated more and more by the fact of being locked up in it, as the desire for sexual release will grow. Women kept in chastity belts for a long period sometimes report losing interest in sex.[3]

In practice, chastity devices are usually only worn for limited periods of time, although modern chastity belts are so good from a medical-hygienic point of view that they can be worn for relatively long periods of time. The investigation of chastity.uk revealed that most wearers were usually locked up for just a week, which will mean that the belt is only used for temporary orgasm denial to have better sex afterwards. More than 50% never wore the belt for more than a month; regular cleaning apart, a third of the respondents were secured for more than two months without having any sexual release, which means that they are not locked up to enhance the pleasure of sexual play in the immediate future for the wearer too, but were kept in real chastity for a substantial period, which for a small minority ranged up to over a year.

Although no reliable statistics are available on the use of chastity belts, reports from manufacturers suggest that three quarter of the belts sold in Europe and the US are worn by men - half of them in a heterosexual, half of them in a homosexual relationship - and only a quarter by women.[3]

Even if modern chastity belts are made of easy-care materials, keeping them clean must not be neglected. When cleaning the chastity belts, it is essential to observe the manufacturer's instructions. If the chastity belt is in contact with the sensitive vaginal flora over a longer period of time, this can lead to painful inflammations if hygiene is poor.