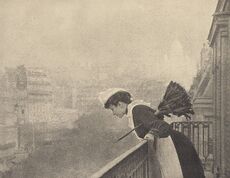 French maid was a term applied in the Victorian and early 20th century periods to a lady's maid[wp] of French nationality. A lady's maid was a senior servant who reported directly to the lady[wp] of the house, and accompanied her mistress on travel. She helped her mistress with her appearance, including make-up, hairdressing, clothing, jewellery, and shoes, and sometimes served as confidante. A maid of French nationality was considered likely to be more expert in current fashions, and was also able to apply her knowledge of the French language when travelling in Europe.[1]

The term French maid is now often applied to an eroticised and strongly modified style of servant's[wp] dress that evolved from typical housemaid's black-and-white afternoon uniforms of 19th-century France[wp], despite a housemaid being junior to a lady's maid. Some styles are conservative while others are revealing. The French maid costume is often used in cosplay[wp], sexual roleplaying[wp], and uniform fetishism[wp]. Depending on design details, some forms can be classified as lingerie[wp].

Though not strict to historically accurate uniforms, the French maid outfit has an easily recognizable pattern and black-and white theme that remains the template for other forms of the costume.

Optional accessories depend on design and context:

The outfits are frequently worn to costume parties[wp] (fancy dress), and also used in drama/theater.[3]

French Maid ensembles, worn usually by women, are a subject of sexual fetishism. They are a form of ladies' fantasywear that, depending on design details, can be classified as lingerie[wipi]. They enjoy a wide popularity and are available from many sources.

The name derives from their being worn by stereotypical characters in risqué burlesque dramas of the bedroom farce[wp] variety.

A wide variety of costumes are manufactured and marketed under the "French maid" description today. These range from comparatively modest dresses extending well down the thigh or above the knees to transparent[wipi] chiffon[wipi] nightgowns[wipi] or outright lingerie ensembles that cover almost nothing. Some costumes are marketed to transvestites, especially for forced feminization.

The classic French Maid costume, however, is a very short and clingy dress, usually black (ideally silk satin[wipi], or closely resembling it) trimmed with shirred white lace. Typically, it includes a tiny white apron attached to the dress; sometimes, the apron is even shaped like a heart, with white lace fringes on the hems and revealing neckline. The skirt area of the dress is usually pleated. If panties are worn with it, they are usually white and ruffled, and the dress is sometimes short enough to display them, especially when the wearer bends over or is made to go down on hands and knees.

Common accessories include a frill worn in the hair, or a tiara, a feather duster, and sometimes white lace cuffs and collar. If the dress has sleeves, they are usually short and puffed shoulder puffs. A corset or a layered white petticoat[wp] may be worn under the dress. The ensemble is almost always completed with black (sometimes seamed or fishnet[wipi]) stockings[wipi] or tights[wipi] and black high-heeled shoes. 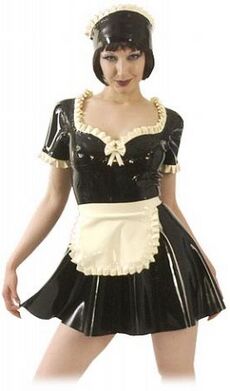