René Kuhn (* 1967) lives in Switzerland and was president of the SVP in Lucerne. He organized the first international anti-feminism meeting in Zurich. He is married to the Russian Oxana and has a daughter. 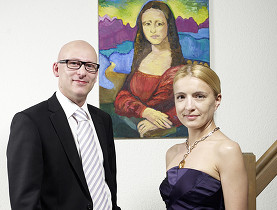 In April 2010 he founded the interest group anti-feminism (IGAF) and in December 2010 he was excluded from the Swiss People's Party[wp] (SVP of Lucerne). Truth is spread offense in public media, Rene Kuhn could not stand emancipated women.[1] In fact, he assumes that women are emancipated, or should be, and therefore castigates the anti-emancipatory nature of feminism. He opposes unilateral favoritism towards women and discrimination against men. In an interview with Arne Hoffmann, he gives a deep insight into the role of purple poodles, good fellows (Biedermännern) and Quotenfrauen in politics.[2]