Sub (short for submissive) is a term used to conote a person who gives up control and gets satisfaction from aspects of submission which may include serving or being used by a Dom or dominant person. Subs often are turned on by suspense, vulnerability, and/or giving up responsibility. They don't dictate the scene except in very general terms. Such a person could also be a masochist or bottom but this is not always the case.

The relationship between a sub and their Dom may be very transitory or can be permanent. Some subs are married to their Dom. Long term relationships are known as D/s (Dominant/submissive) relationships.

The term sub is gender-independent. To distinguish gender, the terms malesub and femsub are common.

People are clearly entitled to call themselves whatever they want and the term sub or submissive is sometimes mixed up with both bottom and slave. Indeed, a bottom or a slave may well be submissive.

Some people enjoy being both sub and Dom. Such people are termed Switches. 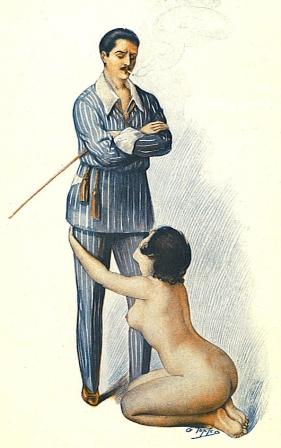 1921 illustration of female submission by Georges Topfer from Le Rêve d'un flagellant ("The dream of a flagellant").