Woman in a Turian Camisk 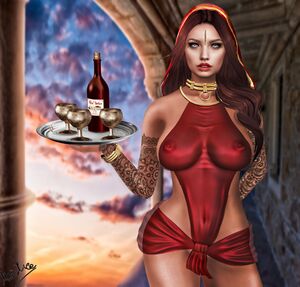 The Turian Camisk differs from other camisks and slaves of Turia will often wear the "inverted T-shaped" camisk of Turia. That being said, the Turian camisk is certainly not the only clothing the Men of Turia enjoy seeing their slaves displayed in:

"The Turian camisk, on the other hand, if it were to be laid out on the floor, would appear somewhat like an inverted "T" in which the bar of the "T" would be beveled on each side. It is fastened with a single cord. The cord binds the garment on the girl at three points, behind her neck, behind her back, and in front at her waist. The garment itself, as might be supposed, fastens behind the girl's neck, passes before her, passes between her legs and is then lifted and, folding the two sides of the T's bar about her hips, ties in front. The Turian camisk, unlike the common camisk, will cover a girl's brand; on the other hand, unlike the common camisk, it leaves the back uncovered and can be tied, and is, snugly, the better to disclose the girl's beauty." - Nomads of Gor, Page 90

"The Turian camisk was also now occasionally seen. It is rather like an inverted "T," the bar of the "T" having beveled edges. It passes from the girl's throat, in front of her body, between her legs, and is then lifted, pulled tight, and wrapped about the thighs. Its single cord fastens the garment behind the girl's neck, behind her back and then, after passing about her body once or twice, ties in front. It conceals her brand but exposes her back. The cord makes it possible to adjust the garment to a given girl. Tightening the cord accentuates her figure. The Turian camisk is worn tightly. Turians are barbarians. In private pens in Ko-ro-ba, where we were taken daily for training, we were taught to wear the garment. A master might require it of us. It is said that only a man knows how to tie a Turian camisk on a girl properly. There are many such sayings on Gor." ** Captive of Gor, Page 160

"The camisk most commonly found in great Turia, the Ar of the south, is that camisk which Goreans, generally, know as the 'Turian camisk.' Interestingly, in Turia itself, it is known simply as the 'camisk,' and what I have called the common camisk is, in Turia, referred to as the 'Northern Camisk.'" - Guardsman of Gor, page 107