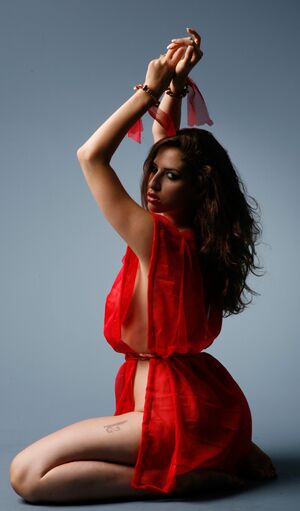 Woman in a red camisk

Camisk is a common Gorean garment for female slaves (the simplest and cheapest garment which provides some degree of coverage at both top and bottom). In its basic form, it is a simple rectangle of cloth, about 18 inches wide and up to six feet long, with a hole in the centre. The kajira's head goes through the hole, and the cloth is worn as a sideless poncho[wp], generally belted at her waist by a tied cord, and often falling a little above her knees in front and back (sometimes shorter). Making a camisk requires no tailoring or seaming skills (though the cut edges of the fabric are often stitched to prevent unraveling). A kajira in a camisk would generally wear nothing besides the camisk, her collar, the cord or strap wrapped once or twice around her waist and tied "snugly" above a hip to provide a belt, often also a string or ribbon to tie back her hair (since the hair of kajirae is often full and long, but elaborate hairstyles tend to be considered inappropriate for them), and possible restraints and adornments (though occasionally she might be allowed to wear low non-heeled slippers). Undergarments are not worn, due to the prohibition against a "nether closure" (see the entries for Tunic[wipi] and Slave silks[wipi]). A version of this was the main slave attire seen in the first release of a Japanese fan's efforts to illustrate Gor book #19[ext] (an early, influential, use of Poser software for Gorean fan-art). Also, in the 1976 movie Logan's Run, the character Jessica 6 wears a garment which is like a camisk on one side (and a cylindrical metal collar as well) during her first appearance; if this were cut down to be more symmetrical, it would become close to a Gorean camisk. The "Turian camisk" is a very different garment from the "common camisk".