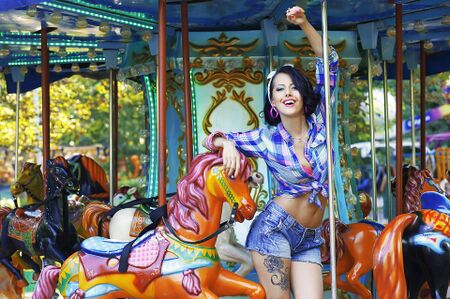 A carousel rider is a (almost always Western, or Asian) type of slut who, unashamedly, spends most of her free time in bars and clubs, generally in a drunken state, seeking sex with as many different men as possible. Carousel riders take pride in their drinking and whoring. They ride the cock carousel like there's no tomorrow or social repercussions.

Most "carousel-rider" women end up at 30 or 32 as bitter cat-ladies, having hit the wall hard and soon (because of years of hard drinking in clubs). Most then enter depression and become bored SJWs, longing for their "glorious" days on the carousel.

Note: It's quite obvious that the term has (fittingly) been coined so as to summon the (sexually-charged) image of a slightly-crazed woman hopping from horse to horse on a carousel. Accurate description of the carousel riders indeed, but at least and to their honor, it is true that a carousel rider can not be a land whale.

Note also: Carousel-riders should not be mistaken with branch swinging women, as carousel-riders don't specifically seek financial gain from their whoring[tiw]. Still, many carousel-riders (the most clever) do evolve into branch-swingers, after a few exhausting years of clubbing and whoring... In Western societies and typically, a "modern woman" will thus be carousel-rider between 17 and 27, then turn to branch-swinging for the next five years, and then (if not successful at securing a husband) morph into cat-lady: for more on this female life cycle, read ages of women[kw].[1]