The wall is the point in a woman's life when she is no longer highly desired (sexually) by men. It is when she is no longer "hot", indicated by the decrease in her physical attractiveness, evidenced by a dramatic fall-off in approaches by men, lower expressed sexual interest by men, and fewer compliments from men - offline and online. When a woman "hit the wall" or reaches the age when her physical attractiveness decreases, her Sexual Marketplace Value (SMV) drops significantly, usually in her late twenties and early 30s. Most peg the age at which a woman hits The Wall at between 28 and 35, with many pegging it at 30 years old.[1] It is called The Wall because of the effect felt by women is like having their face being hit by a wall.

Alternatively, the wall is a point in a woman's life where her ego and self-assessed view of her sexual marketplace value exceed her actual sexual marketplace value. When she hits The Wall, she still feels entitled to the attention she received pre-Wall (when she was on her sexual peak). It is often a startling and frightening experience for women when they realize they can no longer automatically win interest from men.[2]

This usually occurs as a wake-up shock to women when they realize that their power over men was temporary and that their looks are fading. This usually results with first denial and then a sudden change in priority towards looking for a husband. Even after hitting the wall, many women will squander a few more precious years testing her SMV with alphas to double-check, hoping her perceived decline was a fluke, this will make her even more bitter[kw] when she finally has to settle for a worse-beta than she could have gotten before because of squandering her youth. Post-Wall women will do things like post a profile on Match.com and revel in rejecting earnest men interested in identifying compatibility in order to desperately regain the high of power with men.

In The Wall Is Softer Than We Think, American writer Roosh V. notes that the consequences of a woman's hitting the wall before marriage are not as dire as one might expect, at least in the U.S.:

However, some evidences has emerged that men are becoming more reluctant to marry post-Wall women, especially those with kids.[4]

Some notable wall survivors have been Gwen Stefani,[5] Cheryl Ladd,[6] and Terry Nunn.[7] Notes from a Red Pill Girl[ext] notes, "Grace Kelly[wp] got lucky with the wall".[8]

Many men have expressed schadenfreude concerning the effect hitting the wall has had, or will have, on stuck-up women.

Timing of hitting the wall

It is sometimes said that women hit the wall at age 22, in the sense that that is where the decline of her physical attractiveness begins.[9] However, Roosh notes, "While a girl will hardly age from 20-25, you are liable to see a precipitous fall every year after 25, until around 35 when she completes the transformation of looking like her mother."[10] Victor Pride's[kw] How to Pick the Right Wife[kw] notes, "At around the age of 31 a woman's beauty really declines fast."[11] Likewise, Why Men Shouldn't Marry Women Over 30[kw] quotes reader Trainspotting: "So many guys these days are marrying early 30's women, and then, almost immediately - Bam! The wall. It's over almost before it began."[12]

Behavior of pre- and post-wall women

Space Tourist writes, "women lose their shit when they start approaching the wall. Women who are in the prime of their youth and beauty tend to be much more emotionally stable and not nearly as needy."[13]

Summertime Dimes argues "that beta male hamster[kw] and the post-wall hamster are the exact same species."[15]

Wall, also spelled The Wall and The Wall (TM) represents the point in a woman's life where her SMV has fallen to zero and men no longer give her preferential treatment.

The manosphere generally agrees that the Wall hits an average woman when she reach the age 30. However, women such as Lindsay Lohan[wp] hit the wall as early as 25 due to drug and alcohol usage.

Causes of the Wall

The Wall is caused by multiple factors which can be divided into physical and psychological.

A woman's physical attributes change as she ages. Her physical beauty peaks in her early 20's. By the age of 30 her breasts will have begun to sag; wrinkles and white hair will begin to show. Coincidentally, her fertility begins to decline. Hormonal fluctuations due to desperate pregnancy before her ovaries dry up can be another factor. Note the image to the right and how Ana Nikolić[wp] (39) slammed headfirst into The Wall; feminists readily defend this transformation "because she just had a baby you misogynists".

The psychological aspect of the Wall is further subdivided into internal and external.

Internally, a girl begins her life with love and care from her parents. Later she proceeds to school and possibly college. Up to this point in time all her expenses were paid for by parents, the government or a loan guaranteed by the government. More precisely, her income (likely $0) is less than her expenses.

From the period after graduation and before 30, she is in the peak of her beauty and maximum SMV and MMV. As such, men readily treat her to free food, drinks and social events. This enables her to continue a lifestyle in excess of her own income.

By the age 30, all these subsidies would have been depleted. Meanwhile, she may have a student loan to repay. Suddenly, her income must be greater than her expenses to remain solvent. Career-wise, 30 is around the age where meaningful promotions become substantially more difficult to obtain. As such, a woman's internal situation cools down notably after she turn 30.

Externally, all men prefer young girls. This isn't a problem when the woman is in her 20's. By the time she hits 30, her male peers who are serious about marriage would have been married or in an LTR. Those remaining peers interested in marriage would have moved on to younger and more fertile girls. This leaves the pool with men that are not interested in LTR or men that other girls have repeatedly refused.

When a woman asks "where have all the good men gone?", she has hit the Wall.

For marriage and family purposes post-wallers are bad choices. Post-wallers spent their 20's ignoring / rejecting marriage. At best, she is a person incapable of compromise and making practical choices - the must have skills for a family. At worst, she is a slut trying to con a beta so she can continue to ride the carousel.

For sexual pleasure purposes, a man is better off with a prostitute. They are younger and more professional. The cost for one session with a prostitute is comparable to the costs for dating a post-waller. And if a post-waller is offering sex for free, chances are, she is trying to get the sperm.[18]

The Wall (or agepill) refers to the fact that people eventually become milkmired[tiw]. Aging is a process in which the body loses health and functionality, including sexual potency and comes closer to death (eternal unconsciousness). The agepill holds in particular for women as prefer young fertile women[ext] before they hit the wall. Feminists hate this fact so much that they deny it or blame it on men. 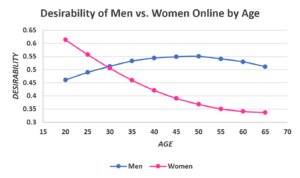 Desirability of men and women online by age.

Even though women live longer, their physical attractiveness declines faster than men's.[19] An explanation for this is that women become infertile sooner, so there was selective pressure for men to be attracted to young women, and men benefit from monopolizing women/girls early on to assure paternity[ext].

Even though women age quicker in men's eyes than vice-versa, the proverb that "women age like milk, men age like wine" is largely cope[tiw] because older men also have a harder time getting access to young, fertile and attractive women, and men also start to become less physically attractive with age. The former is especially true in combination with social norms that prohibit large age differences in couples.

Contrary to women, older men can compensate for their age by status and wealth, e.g. Donald Trump[wp] is born 1946 while his wife is more than 20 years younger, in fact men's dating desirability peaks a lot later than women's (see figure).

Due to men's abundance of sexual demand[wp], however, even post-wall women can still remain entirely passive and find many suitors nonetheless and average men are desired less, so the entire concept for the wall is largely a MGTOW cope.