In family law and public policy, child support (or child maintenance) is an ongoing, periodic payment made by a parent for the financial benefit of a child following the end of a marriage or other concubinage. Child maintenance is paid directly or indirectly by an obligor to an obligee for the care and support of children of a relationship that has been terminated, or in some cases never existed. Often the obligor is a non-custodial parent. The obligee is typically a custodial parent, a caregiver, a guardian, or the state.

A sister asked me if I am "for" or "against" child support. I posted a picture, of a Black woman holding a wheelbarrow full of money, and the words above the picture said "Child Support, Way Better Than A Dad", then I proceeded to answer the question. What I am "for" is choosing wisely when deciding to reproduce and deciding who will reproduce you. What I am "for" is adults being mature if the relationship ends so that the child won't suffer, become molded in the bitterness of its mother, and caught in an emotional tug of war. What I am "against" is women hustling their wombs SPECIFICALLY for the sole purpose of collecting a child support check. What I am "against" is child support being limited or perceived as just financial assistance. Child support means to support your child mentally, emotionally, spiritually, being there for events, listening to them, encouraging them, showing them love and teaching them lessons so they won't have to learn lessons in the streets. 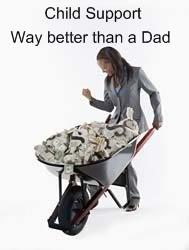 What I am "against" is Black Men not even given a chance to WILLINGLY give, contribute and add to the life of their child or children, before the Mother of his child (or children) runs down to the overseer to handcuff him with a child support order. I am "against" Brothers being violated in such a system that was designed to destroy the Black Family and children being treated as assets and property of the mother, with no regard to the father.

What I am "against" is the Bitter Mama Syndrome. Bitter because the relationship ended, the child's first words are probably my daddy ain't shyt because that's what he hears all the time. I am "against" mothers turning the hearts of the children AWAY from the father, because HER heart didn't get what it wanted.

I also understand that bitterness is NOT limited to JUST women, that men can become scorned and vengeful, and attempt to drag mothers through court as a means to be vindictive.

What I am EMPHATICALLY against is the message in that picture. Some of us are of the warped mind frame that a child support is better than a father and that ALL a child needs is a check. I have posted a youtube video several times of a young lady rapping about how she is going to collect a child support check while rubbing her pregnant belly. I have spoken to young teenage Sisters with the career goal of being a Baby Mama, with a child support check as part of the benefit package. In short, if a judge wasn't need while the seed was planted, then a judge isn't needed to cultivate the seed. I see both sides of the coin. I get it. A child needs to eat, be clothed and sheltered regardless; again does that absolve the father of his duty including finances? No. However in this financial climate, where the unemployment rate of Black Men is at an all-time high, and if the father has the desire, the will, and the sincere intentions to take care of his child but isn't able to at the moment, could not his time be just as valuable? I would think that his time would be more valuable than the money.

Let's be honest here. A single mother with children will always have more options than a single man. When I was single mother of two at the time, I was a recipient of state assistance until I was able to get on my feet. I received food stamps and a childcare voucher, while I looked for work, until I was able to find a job. I have also worked for the State as a Food Stamp Worker, an Intake Specialist and a Children's Medicaid Technician in two states, and while both had programs that would assist in job training or resume building for both genders, majority of the programs were geared towards Single Women. Even in public housing, in some cases a man couldn't be in the home, and if he did, he couldn't make over a certain income, combined with the Mother's income or they wouldn't qualify, so that was another way to lessen his role as "man of the house".

Again there are so many options for Single Mothers, but for a Single Man there are limited options. He will hear BE A MAN ABOUT IT! As if he is attempting to be anything else. Sometimes as women, I think that we have become desensitized to the pain and struggles that our Brothers go through. Now with MOST men, do you think they WANT to be shiftless? Do you think that not being able to provide for their family REALLY makes them feel good? Do you think that for most MEN being labeled as a dead beat dad is something they proudly wear like a badge of honor? I mean, let's step out of our stilettos, and try to slide our feet into his shoes.

When a Black Man enters the world he has a bull eye on his back. Not only does he fight to against our common enemy, he has to also fight against his counterpart; i.e. The Black Woman. I am not going to say that Black Men don't have issues within themselves that effect our community, but with the Black Woman, it seems that we can't even ADMIT that WE HAVE ISSUES as well, and that we have also contributed to the breakdown of the Black Family, and our most CONSISTENT, most EFFECT and MOST destructive contribution is what we first produce in our mental wombs, followed by what we produced in our physical wombs.

I normally don't knock anyone's hustle but this Child Support Hustle has GOT to end. To every woman that reads this article that comments or says to herself "Not everyone woman hustles her womb for child support payments", you are correct. Now let's take that same thinking and apply it towards Black Men. Not every Black Man negates his responsibilities. Not every Black Man leaves his seed to grow wild and uncultivated on its own. I am often asked why don't I write about fatherless homes, or the faults and flaws of Black Men more often, and my response is the same: there are PLENTY of sites that tell a Black Men everything he ISN'T, I prefer to tell him everything he IS.[1]