Earl Silverman († 2013) was the founder of Men's Alternative Safe House (MASH) in Calgary, believed to be the only men's domestic violence shelter in Canada at the time.[1] In 2013, Silverman took his own life shortly after his efforts to keep MASH*4077 failed and he was forced to close its doors due to lack of funding. 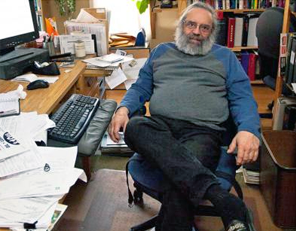 Earl Silverman in his Shelter's Office (2013)

Earl Silverman was victim of domestic violence and committed suicide by hang himself on 26 april 2013.[2] At locking for help, he didn't find anything but ignorance.

Earl Silverman came to Calgary, from Montreal by way of Miami, FL and Vancouver, B.C. in 1978. Earl's most notable accomplishment was his formation and development of the socially innovative "Family of Men" support society in 1999.[3]

"In Canada, they're stuck with a Marxist gender model and that’s never going to change", explaining that the current system defines "male and female relationships where men are the bourgeois group with the power and women as the proletariat with no power." [4]