Feminization or feminisation (see spelling differences[wp]), also known as sissification, is used to describe the practice, especially in female dominance, of switching the gender role of a male submissive. The male in such a process is sometimes and informally known as a sissy. Feminization is usually achieved via cross-dressing[wp], where the male is dressed in female attire, ranging from just wearing female undergarments to being fully dressed in very feminine attire, including make-up, hairdress and nail polish. Some males take on tasks, behaviours and roles that are overtly feminine, and adopt female mannerisms and postures in tasks such as sitting, walking, and acting in a feminine manner. This emasculation may be coupled with punishments such as spanking[wp] or caning to gain cooperation and heighten submission of submissive male. Begging and pleading to stop the feminization may be part of the fantasy.

Costumes are sometimes very domestic, suggestive of servitude or ageplay[wp]. The clothes may be from those of a traditional submissive female role, such as schoolgirl, secretary or a "sissy" maid, to a princess.

Feminization can also involve the conversion of a masculine name into a feminine name such as "Stephen" into "Stephanie", "Joseph" into "Josephine", or "Daniel" into "Danielle", as part of a constructed feminine persona. The submissive male may also be given feminine name that is different from his male name, referred to as "a good girl", or insulted and degraded with derogatory terms usually applied to women, such as "slut" or "whore". 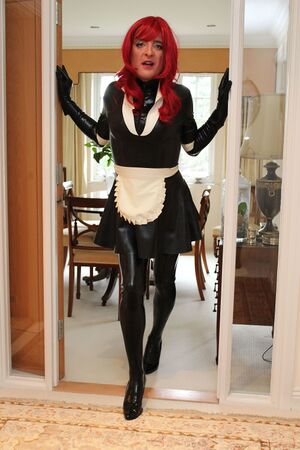