A mermaid dress is a dress[wipi] which is tight around the bottom[wipi] and thighs, but which expands out around the lower legs, coming down to the ankles. The name comes from its resemblance to a mermaid's tail. In extreme instances, the dress may be so tight around the thighs that it acts rather like a hobble skirt.

Normally, such a dress would be made of satin[wp]. However, latex ones are available from some fetish suppliers. 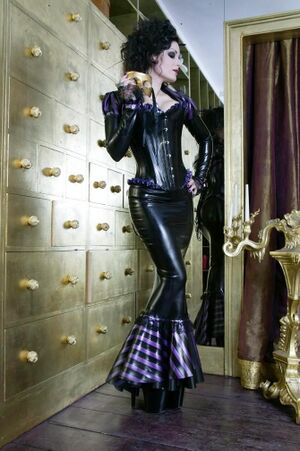 The mermaid dress is an elegant evening dress and worn to festive occasions. It is either a cross between corset dress and hobble skirt, or elaborately worked bra and very figure-hugging and tight skirt[wp] (see third picture).

In contrast to the mermaid suit, the mermaid dress is neither suitable for swimming - the tail is suggested here instead of a swim fin[wp] as a kind of train[wp] - nor to bondage - the tail is not closed here, so that (although small) steps are possible - nor for playing.