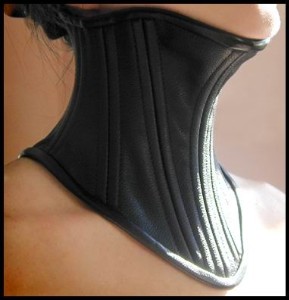 A neck corset is a type of posture collar with incorporated stays[wp] and is generally not considered a true corset.

The neck corset is designed to restrict head movement. It contributes to the immobilization of the wearer, already its rigidity prevents the head from being turned, or tilted backwards or downwards. The neck corset thus forces the wearer to always look straight ahead.

The stays incorporated in a neck corset are specially made shorter to support the weight of the head on the shoulders, while its corset structure helps maintain posture by keeping the chin high and the neck elongated. It is often combined with a traditional corset to achieve better posture[wp].

It can be narrow or as wide as the height of the neck. There are many variants. They can be made of many different fabrics, such as leather[wipi], rubber[wipi], etc., but also some more common fabrics are used.

Neck corsets usually have neck lacing; others have front lacing or are secured by laces[wp] or a zipper[wp].

Depending on the features, they can be decorative or worn as a form of fetish clothing[wp]. If they restrict the movement of the head, they can be considered a variation of a posture collar. Although a neck corset restricts head movement, it is not usually used for medical purposes like the cervical collar[wp].

Usually, neck corsets are not used to compress the neck in the way a regular corset would cinch the waist, except for breath control games[wp].

As with anything that may exert significant pressure on the windpipe[wp] at the front of the neck, there is some risk of asphyxiation[wp]. Anyone wearing a tight neck corset must therefore be carefully monitored.[2]