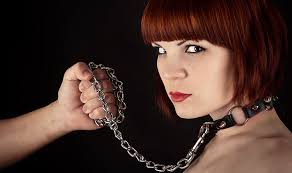 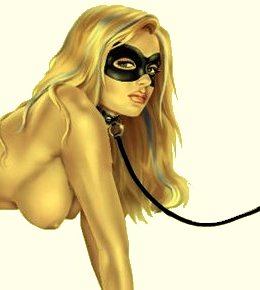 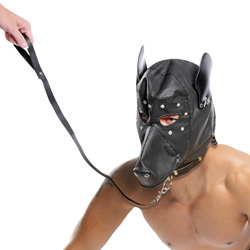 A leash or lead is a length of rope[wipi], leather[wipi], chain or other flexible material, ostensibly for restraint[wipi] or control. Most leashes attach to collars or harnesses, while others loop directly around the person's neck, wrist, ankle or sometimes around the cock and balls[wipi].

The most common leash used on a human is one with a clip at one end and a loop of the same material at the other. It is commonly made of leather (occasionally braided for extra flexibility) but sometimes of nylon webbing, small-linked chain or rope. Many people use a strong dog leash, especially a black leather one. Typical length in total is between three and six feet.

The purposes of a leash include:

Leashes are often used in human animal roleplay, especially puppy play, where they simulate and psychologically enforce the aspects of the submissive being a pet.

Leashes are most often used in private or in a secluded public place, or sometimes in public but discreetly so as not to be obvious to others. Sometimes, a leash is used very openly and publicly, especially in a scene club.

At a club or play party, D/s players often prefer formal etiquette[wipi] and might use a leash as part of this, to signify that the submissive is not single or, if the leash is held in their mouth, that they are not available for conversation.

Collar and lead play is a practice whereby the dominant will physically control the movement of the submissive by keeping them on a collar and lead. The collar would usually be leather but can be made of steel.

This kind of play would almost certainly be used in dog roleplay scenarios and could be used in public humiliation scenes.

In the Gor novels written by John Norman, attaching a leash to a kajira's collar is often mentioned. The leash is usually attached to the front of the collar, since Gorean masters are very careful to avoid uncontrolled pressure to the vulnerable front of the throat (windpipe).

A tether differs from a leash in that it is not used to lead a mobile captive, but to keep the captive fixed.