The World Hijab Day is the response of Muslim women on the "burqa" ban[wp] in France and the secular religion of state feminism. The Muslimas invite on World Hijab Day (February 1 of each year) non-Muslim women to wear the hijab[wp] (Islamic head covering) for one day.[1]

The initiative was launched by Nazma Khan - who had come with 11 years from Bangladesh to New York - to set a sign for freedom of their own decision. Organized through social networks, so the interest of Muslims and non-Muslims was awakened in some 50 countries around the world.[2]

Before judging, cover yourself for a day.

"We invite both the non-Hijabi Muslim & non-Muslim sisters across the globe to wear and experience the Hijab for one day." 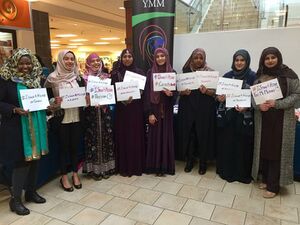