Daphne Patai (* 1943) is a professor in the Department of Languages, Literatures, and Cultures at the University of Massachusetts at Amherst. She is the author and editor of twelve books, among them The Orwell Mystique: A Study in Male Ideology (1984), Brazilian Women Speak: Contemporary Life Stories (1988), Women's Words: The Feminist Practice of Oral History (1991, co-edited with Sherna Berger Gluck), Rediscovering Forgotten Radicals: British Women Writers 1889-1939 (1993, co-edited with Angela Ingram), and Heterophobia: Sexual Harassment and the Future of Feminism (1998). Her 1994 critique of women's studies programs, written with Noretta Koertge, was reissued in a new and expanded edition in 2003 as Professing Feminism: Education and Indoctrination in Women's Studies. She also co-edited with Will H. Corral a large volume of essays criticizing contemporary theory fads. Titled Theory's Empire: An Anthology of Dissent, it was published by Columbia University Press in the spring of 2005.

Long concerned about the attack on free speech on American campuses, Patai has been involved with FIRE since its inception. Years in the academic world (including ten years spent in a women's studies program) have alerted her to the dangers of politicizing education. Her articles on these and other problems in higher education have appeared in The Chronicle of Higher Education.

Patai's most recent books are collections of her essays: What Price Utopia? Essays on Ideological Policing, Feminism, and Academic Affairs was published in 2008 by Rowman & Littlefield, and História Oral, Feminismo e Política was published in 2010 by Letra e Voz in Brazil.

Daphne Patai (* 1943) was working just as Noretta Koertge[wp] in the area of women's studies and discovered that feminists any criticism of non-feminists to their ideology simply ignore. Their results have been recorded in the book "Professing Feminism". This they held as the central fact that most feminists devote any attention to the criticism of non-feminists. Of representatives of their own faction they sound easy criticism - but this mainly refers to the purity of their commitment to feminist politics and doctrine. In contrast, when scientists criticize each other, their focus is mainly on the research methods and how well can bring different theories with the data in accordance about. According to Patai and Koertge there is not this process in women's studies.

In her work "Heterophobia" Daphne Patai describes how gender feminists change and change in their statements independently and from a set of neighbor concepts, meanings and viewpoints. In it she turned especially against totalitarian thinking in the U.S. women's studies as well as against those of their so called "Sexual Harassment Industry". Unfortunately her book "Heterophobia" about the growing feminist movement in the defamation of sex between men and women was not translated into German. 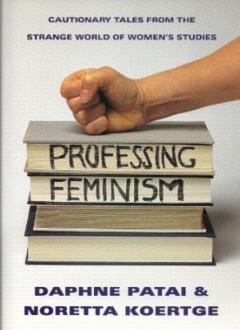