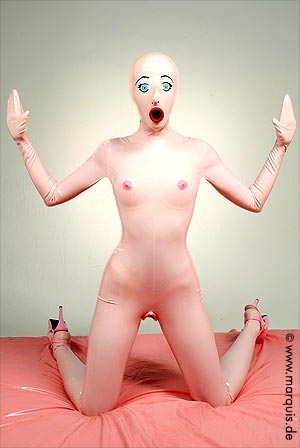 Dolly-Catsuit from Marquis
A doll (a.k.a. Rubber doll, rubberdoll, rubberdolly, v. dolling, v. rubberdolling) is a latex fetishist whose desire is to acquire the appearance of a doll, usually a female doll, through a mostly latex costume that completely covers the face and skin.

A doll's suit is often a catsuit, which may have been specifically designed to mimic a store mannequin or a blow-up doll. Common colours thus include approximations of skin tones, white and black (for a heavy rubber[lw] look).

For some skin or doll colours, hoods and gloves may suffice, if they feel otherwise content with wearing clothes to hide their own skin and body shape.

For nude (a nude doll, that is) applications, the suit may feature blow-up-doll-like openings with insertable pouches.

Some manufacturers[lw] offer catsuits designed to look like a blow-up doll. These might include inflatable[lw] bosom, hips or other regions to enhance the visual effect of an artificial doll, or to give a male wearer the shape of a female.

This is a sleeveless silicone bodysuit in skin colour, with elaborate fake female organs. It is built without padding, but padding can be inserted. The down side is the price and for some the less obtrusive skin touch.

Cut up blow up dolls

Some have attempted and have had varying degrees of success in using the outer shell of a blow-up sex doll[wp] as a full body suit. Most of them are really too small to engulf a person, but some varieties have been built reasonably life size. They're made of various materials, from PVC to rubber and thus their stretchability is not always sufficient for comfortable wear.

Balloon fetishists have used heated air to stretch various plastic inflatable items whilst retaining the proportions of the object close to original.

Constructed of hard plastic, fibreglass or the like and depicting body forms considerably thinner than the "common people", these are even less likely to fit anyone if split in half. Except for those having a petite figure, a custom-made doll shell would need to be constructed.

Others seek a mannequin-like appearance or a sex doll-type face, while yet others pursue a realistic face capable of mimicking real life women (or men), only in the material of choice. Several manufacturers have hoods aimed at achieving both objectives. Notable features include:

Store window mannequins' heads are often solid and can't easily be converted for use as a mask. Even those that are hollow are often too small for a common head, especially a male head.

Blow up dolls' heads come in three types: flat printed PVC, semi-rigid plastic face with the rest of the head seamed PVC and full head foam latex or equivalent. The first type is likely to fit badly on a real head and the plastic faces are mostly too small to fit your head into. Full latex heads have quite thick layers of latex and are then likewise too small to fit over most heads.

Even where an artificial look is pursued, some might want an artificial approximation of the visible sexual organs. Some rubber or silicone accessories are manufactured that hold back the wearer's own bits tucked away under the padding and possibly even allow for bodily functions without removing the accessory (for a limited time, at least).

As with any full body latex wear, wearing full dolling gear for longer periods can be a strain. Some have successfully trained themselves to tolerate latex encapsulation on a larger scale by gradual introduction.

The basic idea is to start with small items, such as briefs[wp], and wear them for one hour every day, but allow themselves to take them off if they start to feel excessively disturbing. When the one hour limit has been reached on seven consecutive days, the target is set at two hours. After this, they may allow themselves to take off the item after the one hour of wearing, a duration that already is known to be achievable. Again the time is increased only after seven consecutive successful days. At some point the subject can gradually move on to items covering more of their body area. In one year, people can become accustomed to quite a lot.

For each their own:

Doll fetishism is a sexual fetish[wp] in which an individual is attracted to dolls and doll like objects such as figurines. The attraction may include the desire for actual sexual contact with a doll, a fantasy of a sexual encounter with an animate or inanimate doll, encounters between dolls themselves, or sexual pleasure gained from thoughts of being transformed or transforming another into a doll.

Doll fetishism is often played out as a role play between two or more people. The "doll" is often a female or male dressed to resemble a Barbie doll[wp] in shape: bold hair, enhanced breasts, small waist (normally from a very tight corset), high heels and a revealing outfit made from rubber, latex or spandex.

Virtual worlds (a computer-based simulated environment) offer unique opportunities for exploring this fetish, where individuals are represented by modifiable avatars. Players can adorn themselves with plastic appearing skin, stereotypical hair and costumes, even going so far as to remove all distinguishing characteristics from other dolls in the environment and being identified by number instead of name. There are also fetish sites that feature videos and animated .gif pictures of individuals achieving orgasm onto or by use of a small figurine.

The anime[wp] series Rozen Maiden features a cast of "living" dolls that, among various online communities, sparked an interest in the more classic style of porcelain dolls built with ball-joints at the apex of the arms and legs. In some instances (as seen on some numerous internet imageboards) the ball-joints themselves are considered the object of the fetish rather than the doll they are a part of, much like the armpit of an individual rather than the individual themselves.[2]

A doll is a child's toy that represents a baby, child or miniature person, and can include likenesses of animals and imaginary creatures. Dolls can be fashioned from a vast array of materials, ranging from stone, clay, wood, bone, cloth and paper, to porcelain, china, rubber and plastic. Playing with dolls usually involves roleplay[wp] and imagination[wp].

Dolls that represent babies or children are traditionally most popular among girls. Action figures representing superheroes and their predecessors, action dolls, are particularly popular among boys. Though some boys will get quite defensive about calling an action figure a doll, due to perceived gender roles.

While dolls have traditionally been toys for children, they are also collected by adults, for their nostalgic value, beauty, historical importance or financial value. In ancient times, dolls were used as representations of a deity, and played a central role in religious ceremonies and rituals. Lifelike or anatomically correct dolls are used by health professionals, medical schools and social workers to train doctors and nurses in various health procedures or investigate cases of sexual abuse[wp] of children.

There are also sex dolls[wp] for adults.

Children often play with dolls in scenarios where the child plays the role[saw] of an adult (e.g. a parent) and the doll plays the role of a child. In such scenarios, it is not uncommon for the child to scold[saw] and/or punish the doll for being "naughty"[saw], for example by spanking the doll (see children spanking dolls[saw]). In people's imagination and in spanking fiction[saw], there is also the topic of dolls that are designed for spanking, see spanking dolls[saw].[3]