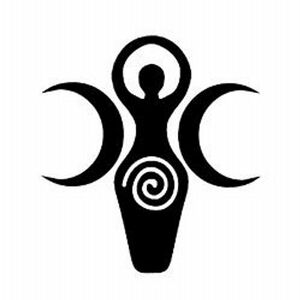 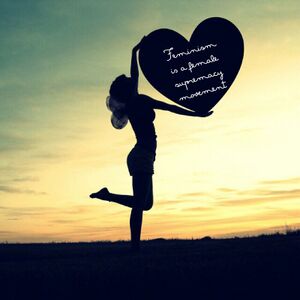 Feminism is a female supremacy movement

The counterpart to this is the Male supremacy.

Female supremacists engage in copious amounts of pseudo-scholarship to "prove" the inherent biological superiority of women. These tend to read like just about any other work extolling the superiority of a race or sex, this time with women shoehorned[wp] in.

In addition to using false scholarship and junk pseudoscience[wp], female supremacists love to use wordplay, confirmation bias[wp], and sophistry[wp] to make it seem like certain research actually supports their position, when in fact it clearly does not and only makes them look ridiculous. They typically use statistics on mortality and morbidity, for example, as well as research on sex chromosomes to argue the "biological" or "genetic" superiority of women. This inane reasoning generally consists of subtly measuring "superiority" by such particular criteria (e.g. longevity) that it literally forces the conclusion of female "superiority".

A common argument made by some female supremacists is that women emerged prior to men in the evolutionary scheme of things. For some reason, this is supposed to be important or significant in some way and is supposed to prove some sort of bizarre doctrine of "female primacy." The typical argument consists of a reiteration of the notion that a female pathway is the default for mammalian embryonic development (in absence of a Y chromosome). However, according to people who know something about evolution, our lineage has been divided into two sexes for over 500 million years (since before humans). Obviously humans evolved from animals already divided into two sexes, which also similarly evolved from animals with two sexes, etc. Furthermore, it is more or less "random" how sex is determined in animals. In some animals (e.g. birds and butterflies) the developmental process is reversed, with a male pathway being the developmental default and females having the equivalent of a Y chromosome (termed W). No biologist supposes that male birds existed prior to female ones based on this information. Many other species determine sex by temperature or social status. In biology, maleness and femaleness are typically defined by relative gamete size, so one could not have come before the other in this context. By definition, without "maleness", there is no such thing as "femaleness", and vice-versa. In addition, even if it were true that human females preceded males in evolution (which clearly it is not), female supremacists seemingly ignore the fact that the exact same "female-default paradigm" has been wrongly used in the past by male chauvinists to argue for male superiority, in which it has instead been argued that females are the incomplete, passive, and unvirilized versions of males, lacking a Y chromosome. And, of course, slime molds and amoebae evolutionarily preceded fish, which preceded amphibians, which preceded mammals, etc, and very few individuals champion the so-called "primacy" of slime molds. It must also be noted that more modern research is beginning to cast doubt on the idea of "default sex development" itself, suggesting that an intricate process of genes and hormones take an active role in the development of both sexes.[1][2]

Another nonsensical argument that female supremacists love to throw around is to make a huge deal about the fact that the male has one X chromosome and a smaller Y chromosome while females have two X chromosomes. In their mind, this makes females genetically "superior" because the Y, being a smaller, degenerated X-like chromosome, indicates males as "broken" or "incomplete" versions of females. Obviously, this argument is preposterous and shows profound ignorance on basic genetics and how sex chromosomes work, because it is well known that males and females actually use all the same genetic information, the Y simply switching on hormones that (usually) trigger male development. In fact, males use all the genes females use (males express all the genes on their single X) but there are genes on the Y which females do not use at all. The consequence of having only one X chromosome has nothing to do with the complexity of the organism or missing genes, only that it makes males more susceptible to detrimental mutations on the X chromosome. Since both sexes use all the same genes (except for the small amount on the Y chromosome), the argument becomes meaningless. Also, it wouldn't mean anything regardless since having more genes neither makes an organism more complex nor better off as some plants have more genes than human beings[3] and extra genetic material in the human genome is usually deleterious and typically results in disorders like Down syndrome[wp].

Female supremacists also like to make much of the fact that the Y chromosome is shrinking and believe that males are slowly vanishing. To them, this proves that nature "prefers" women and is actively and purposely trying to get rid of males. In reality, this is pure nonsense, as nature has no biases, purpose, or goals. Indeed, natural selection typically invests equally in both sexes[4] and new sex determining mechanisms will simply evolve to replace the job of the Y chromosome, if it indeed does disappear.[5] This means that mammalian maleness will continue, just that it will be determined by different genetic mechanisms.

Women are biologically superior to men

Female supremacists also love to point to the fact that women live longer and are less susceptible to X-linked and developmental disorders as proof of some "biological superiority." They pretend such information is "news" and recently uncovered data, but this information is not really controversial and has been known (at least) since the late 19th century. Furthermore, one is tempted to ask, "so what?" Males and females have biological differences due to evolutionary tradeoffs. This illogical babble is like a male chauvinist saying that males are superior because they are physically stronger, suffer less from autoimmune diseases, have a higher threshold for pain,[6] have greater lung capacity, recover quicker from concussions, heal faster from wounds, etc. One might as well argue for the "biological superiority" of water hydra or sea turtles. Again, this just has to do with how the female supremacists subjectively define "superiority" in the first place. It is not really clear how data on mortality or morbidity can be used to argue for any such concept. Of course, since "maleness" and "femaleness" are two different evolutionary strategies, and each sex has evolved biological and genetic adaptations to meet their own respective sex's evolutionary problems, "superiority" of one or the other is completely meaningless to any biological or evolutionary perspective.

Men are superfluous to reproduction

Occasionally, female supremacists will glamorize the process of parthenogenesis in order to "prove" that women do not need men to reproduce, or to again suggest the "primacy" of females (this is refuted above in the section about how nature invests equally in both sexes). Oftentimes, they claim that humans were once naturally parthenogenetic and suggest that women may someday naturally evolve the ability to do it again. Of course, this notion is absolute nonsense as humans evolved from fully sexual ancestors and thus were never asexual. Furthermore, this entire argument is blown out of the water by the fact that asexual reproduction is biologically impossible among mammals and any evolution towards it would have to be human induced and thus not "natural."[7] Of course, there's no telling what possibilities future technology might bring, but who's to say that both sexes will not have the ability to reproduce themselves (think stem cell derived eggs and sperm, gene combination, artificial uteri) in the future?[8]

Female supremacists claim that while males may have more physical strength in general, women are inherently more intelligent than men and have greater social capabilities. These claims are based on cherry-picked[wp] and misinterpreted data from neuroscience and psychology. The gender differences studied in these fields are complex and there are still many open questions. Furthermore, most psychometric estimates suggest that men and women are equally intelligent overall and that cognitive differences, when they exist, are small with large overlap.[9] Because men's brains tend to be larger on average than women's, other structural differences tend to be contested as to their importance due to arguments over how adjustments should be made to the data to account for the size difference. What, exactly, these differences might mean, if anything, is also a point of debate, of course. The claims of "scientifically validated" female superiority are ridiculous. Some of the more common claims and mistakes include:

Female supremacists often cite a bunch of statistics to demonstrate that society is heading toward a matriarchy. The facts they cite are usually concerning the "gender-education gap" (i.e., the fact that higher education enrollment is now higher among females) or stats ripped from Ashley Montagu's nonsensical diatribe The Natural Superiority of Women. This, of course, fails stats 101 - correlation does not equal causation[rw]!

Supposedly, this transition to matriarchy is just beginning as women have gained legal ground as equals in the Western world. Female supremacists cite examples of matrilineal cultures like the Minangkabau people[wp] as more "natural" arrangements of society. There are a couple of blindingly obvious things wrong with this. How were women oppressed for so long if they were the superior sex? This is answered with an escape hatch[rw]-type argument that the patriarchy oppressed and propagandized women long enough to create a false consciousness[wp] that wasn't broken until the women's liberation movement. War, often deemed an exclusively male phenomenon, is cited as the primary vehicle for foisting this propaganda; largely a rip-off of communist talking-points about how the sole purpose of "imperialist war" is to keep the proles distracted. But a number of other cultures that were matrilineal or allowed women to have some rights refute this argument as well. Iroquois women, for example, could own property, elected the sachems (chieftans) and took part in the political process, but their society never transformed into one where all the men magically became the sex slaves[wp] of women.

The female supremacist ideology often incorporates some kind of religious element. This is usually a form of "goddess worship" whose theology is ripped off from various feminist neopagan[wp] or Wiccan[wp] beliefs and pseudohistories[wp]. The other version tends to be some kind of Dan Brown[wp]-esque brand of Christianity with loads of stuff about the "sacred feminine," the Holy Grail[wp], Mary Magdalene[wp], etc. Sometimes these are mixed and matched, with occasional things borrowed from Eastern religions like yoga[wp].

Some small "churches"/sex cults devoted to female supremacy have sprung up. One is called the MotherGod Church[ext], which was founded by former Playboy model, bodybuilder, and "stripper for God" Rasa von Werder. Another is the Service of Mankind Church[ext], which has been in San Francisco since the 1970s. A group calling itself the Cybelians[ext], named after the Phrygian earth goddess Cybele, claims to be an international movement. 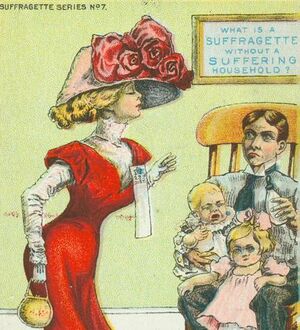 Female supremacist is often a snarl word[rw] flung at feminists by wingnuts[rw] and men's rights advocates. The female supremacist stereotype was invoked by anti-suffragettes in the late 19th and early 20th centuries. Anti-suffragette propaganda often featured images of society with gender roles reversed and a matriarchy replacing a patriarchy.[11]