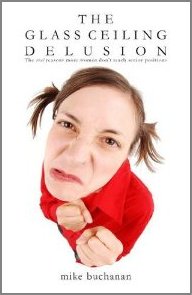 The term glass ceiling (german Gläserne Decke) was coined in the 1980s in the United States. This is an explanation for the phenomenon that many highly qualified women in career advancement at the latest "stuck" at the level of middle management and not make it into the senior team. This theory postulates a preference for the male staff to female colleagues. The explanatory model is based on an invisible barrier to women's advancement.

Journalist Julia Lohr questioned in a comment that it is the so-called "glass ceiling" is the chief floors. You noticed that the finding "women in top positions are scarce" and the general lament "the 'Old Boys Networks' blocking the way into the top echelons of the economy" in conflict.[1]

There is some evidence that the phenomenon of "glass ceiling" with hypergamy can be explained. A study by the U.S. Federal Reserve (Fed) examined the number of employed women with a university degree, who were married to equally well-trained men and found out: their number decreased every year from 1996 to 2003 by 0.1 percent. Earlier the trend was reversed: From 1976 to 1992 the number of employed university graduates rose with well-trained husband by 2.4 percent per year. The figures leads to the following interpretation:

"More and more highly educated women who work not necessary because her husband earns a lot of money -. And then let her ditch the job actually Stefania Albanesi, one of the authors of the Fed study linked the declining curve in the profession make academics with wages for college graduates, and out came that these salaries were dramatically increased in just the same periods on the other side so the employment of women has increased as a whole - for those women who were not married to university graduates (...).
'In the last two decades climbing the wages for skilled men so steep that the other income of a family on the other hand began to seem small - that is usually the wages of women', Albanesi told Reuters. The result: 'Sometimes married women went out in the middle of her career, at the very time when their men came in higher positions. They ceased to earn an income, which they no longer needed.'
Underpinning is the thesis by another trend: The most educated women interrupted their careers not from around when their children were born or when they were small children - but only at the time when they were already in the school. So just to earn even in the years when the fathers really good money began ...
The rich husband effect (the title of a commentary on a lawyer portal) would be more naturally now be summarized quite simply: women make it easily - too easily."[5]

The point is: As long as men are willing to feed women, women are likely to remain under-represented in boardrooms continue, albeit for different reasons, as diagnosed by the feminist misogyny.[6]

It is not spoken out loud, the more labor laws there are for women, the more afraid of employers to hire women. A woman brings possibly a sexual harassment suit in the house. Or displays an employee who criticizes them or their announced. If an employer imagines that the company's name is dragged through the mud, that he turn lawyers and a woman might pay $ 100,000 compensation must (which she leaves the company, because it has no longer need to work), that he may be sued for damages by a woman, because it works on the screen that its male officers on the one hand have to be afraid to criticize the woman, on the other hand also to joke with her ​​that he ... Then begins the employer unknowingly in order to discriminate the sex that can cause him such difficulties.[7]

Mike Buchanan analyzed in his book, "The Glass Ceiling Delusion" the assertion that companies allegedly in a glass ceiling prevents women ready to ascend to leadership positions. His years of experience as a manager in business and from psychology borrowed arguments are skillfully by Buchanan in a net woven of arguments, which can look like the protagonist of a "glass ceilings" as delirische followers of a cult, which apparently makes "high".[8][9]

Fabian Ochsenfeld provides in his article "Glass ceiling or golden cage: the advancement of women fails in first management positions at operational discrimination or family responsibilities?" the empirical evidence that it is not a glass ceiling in German companies are. Nobody prevents capable women because in leadership positions to move up, as the worshipers of the glass ceiling say. All who claim the existence of a glass ceiling, have personal financial advantage and the same the, sells on the medieval fair a toad elixir that diabolical and invisible warts on the nose effectively tackled, because: a glass ceiling does not exist.[8][10]