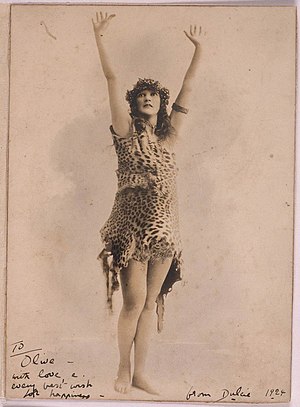 Panther girls are described as some women who are dissatisfied with the relatively narrow roles allocated to free women in Gorean societies, or who have run afoul of the laws of their native city-state or community, run away to the northern forests of Gor, joined there by some successfully-escaped kajirae. Such women are known as "panther girls" (from the panther-skins they wear as clothing) or "forest girls". Since they are outlaws (not under the protection of any Gorean home stone), they can be legitimately enslaved by anyone they meet, so they group together into roaming bands for mutual protection, and generally avoid men except in a few specific contexts (tense barter encounters, surprise ambushes to acquire captives, and occasional temporary bandit alliances). Some panther girls are very skilled with bows and arrows, but they're not real warriors (Norman thinks that a woman warrior is a contradiction in terms). Their only real military tactic is to try to arrange a surprise ambush to capture isolated individuals or small groups in the forest; if they fail to achieve a surprise ambush, or take on a group which they do not outnumber, then they very often lose and are captured and enslaved. They wear panther skins instead of cloth partly because they try to be self-sufficient, making do with resources available in the forests, in order to keep potentially dangerous encounters with outsiders to a minimum. However, they do periodically barter captives and stolen objects for a few items which they greatly need or desire, but which they can't make for themselves - mainly knives and arrowpoints of hard metal forged to a sharp edge, and the occasional block of hard sugar candy. Panther girls are often contemptuous of women who are not suited to the panther-girl way of life, and show little compunction about making use of their male and female captives (including sometimes raping male captives) while usually trying to quickly trade them for weapons, candy etc. Also, the word "talunas" refers to lesser-known groups of women who have a somewhat similar lifestyle to panther girls - except that talunas have run away to certain remote areas of the equatorial jungles (instead of the northern forests), and sometimes dominate over pygmy tribes there.[1]